I was happy to meet with member of Parliament Yoav Kisch – יואב קיש (Likud). We spoke at length about the growing social schism in Israeli society, and the need for a cohesive and unifying element.

Yoav was one of the founders of the People’s Unity Caucus in the Knesset, and led the “Day of Unity in the Knesset” – a dialogue between ministers and Knesset members with representatives of “Israeliness.” I was very impressed by his willingness to create a spirit of mutual responsibility in the Knesset, as well as his many efforts to strengthen the ties between the divided segments of the public, and support positive initiatives that are promoting a dialogue of connection.

We share the urgency for Israel’s unity specifically in our time, and I support his efforts towards strengthening this unity. It is precisely from the Knesset in Jerusalem – which currently presents division and resentment – where an example unity and connection should radiate to all. 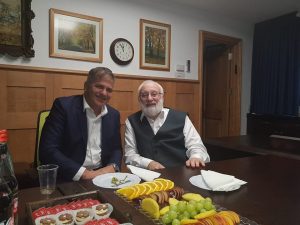