My article in Newsmax: “Arming Ourselves Gives False, Empty Sense of Security” 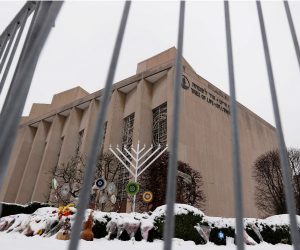 The spike in hate crimes has opened the debate over the use of guns for self-defense among the American Jewish community. “We live in a time of danger,” stated the U.S. official for combating anti-Semitism, Elan Carr, in a recent conference in Jerusalem.

Carr suggested to post security guards at every Jewish temple, community center, and school in America. A rabbi in Boston backs this view, proposing that his members carry guns to the synagogue for protection. Others are already taking firearms training. It is better to be safe than sorry, but these are band-aid solutions to a problem that can only be solved from another level.

The deadly attacks in Pittsburgh and Poway, California prompted to reinforce security measures at Jewish facilities in the United States. Incidents against the Jewish community increased 57 percent from 2016 to 2017, the highest in 20 years and the largest single-year rise in history, according to the Anti-Defamation League (ADL).

Even though white supremacists are responsible for recent attacks and threats to synagogues, terrorism and violence inspired by Islamist extremism “continues to pose a serious threat to Americans,” says a recent report by the anti-Semitism watchdog group.

It declares that, as of June, three people have been arrested for plotting Islamist terrorist attacks which include Jewish targets.

The uneasy feeling and menace facing Jews in America are, in fact, a wake up call to reflect on our state as a nation and follow what the Torah mandates to us: to connect by the principle of “love your neighbor as yourself,” radiating that positive force globally.

Should we fail to do that, non-Jews will perceive our disunity as the cause of their problems, putting pressure on us through violent acts. Therefore, until we unite above our differences, anti-Semitism only will get worse.

Arming ourselves will simply give us a false and empty sense of security.

We currently do not realize how humanity’s unity depends on Jewish unity.

Both are deeply interrelated, as Jews have a central role in the world’s wellbeing.

As it’s written in the “Introduction to The Book of Zohar,” “Israel refers to the inner part of the world, whereas other nations are considered its outer part.”

Therefore, unity should be our priority.

By getting closer to each other, narrowing the huge gap currently separating us, we will become an example to humankind. The power of unity will make any form of hatred against Jews vanish. It’s not only the strongest weapon — it is the only weapon that can guarantee peace and safety.
[248592]

Striking Of The Inner And The Surrounding Light
Podcast Powered by podPress (v8.8)