New Life 1111 – The Development Of Judaism: Settlement In The Land Of Israel, Part 2 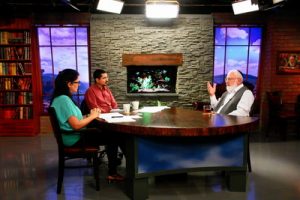 New Life 1111 – The Development Of Judaism: Settlement In The Land Of Israel, Part 2
Dr. Michael Laitman in conversation with Oren Levi and Nitzah Mazoz

The people of Israel had a tendency toward connection and love. However, the ego was awakened and had to be conquered after they entered the land of Israel. The construction of the Temple symbolizes the construction of bonds of connection and love in which a higher power is discovered. Cohens, Levites, Israel, sacrificial worship, and so on, mean that they were taking an egoistic desire and transforming it into a desire to bestow. In fact, there is no reality other than our desires with which we work. They portray imaginary places. A person who wants to approach the Creator, the power of bestowal and love, sacrifices the ego. A nation that passes through inner corrections becomes “as one man with one heart” and the power of bestowal becomes revealed.
[245505]
From KabTV’s “New Life 1111 – The Development Of Judaism: Settlement In The Land Of Israel,” Part 2, 4/23/19