Our groups from 34 countries participated in a special talk we had this morning in preparation for our upcoming Kabbalah Convention in Europe, that will take place in Bulgaria, November 8- 10, 2019.

The theme of the talk was: How to Unite Babylon? Kabbalah Academy Students from the EU gathered with a great concern regarding the future of their continent and presented their questions, so we can begin preparing a strategy for spreading unity in that region. Thank you to everyone who joined us. 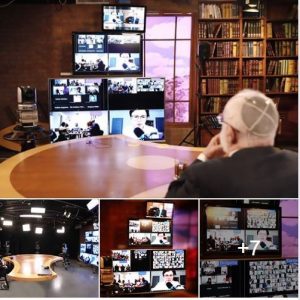 It is possible to accelerate the movement toward the Goal of Creation while being in any state, but especially in a state of ascent: to realize that one has received it in order to move toward the Creator and to ask to come closer, EVEN THOUGH one feels no need for it.
And if one does not succeed in the request, he will receive a descent…

Being responsible for one’s actions means that within the boundaries of the freedom of will that I’ve been given, I respond as if the Creator was in my stead…

Good deeds are when you wish to be in the common desire to draw upper light in order to fulfill the friends through you, as a conduit between the Creator and the others. Fulfilling others is exactly what a good deed is.

A sinner is one who has performed great work on oneself. The “Light of Torah that Reforms” comes to him and shows him the place from which he must return to the Creator.  A righteous man is one who, with the help of the Light that returns one to the Creator, corrects his Kelim—intentions for bestowal.

As you weave the blanket of love, treat negative things as being sent from above. The Creator deliberately created evil, but everything is predestined to direct us to the upper force. If we attribute everything to one Source, we will weave a foundation for the light, the blanket of love that will envelop us.

What’s Better? Reading From a Book or a Tablet?

Prison Is Not What Reforms A Rapist

Question: Your Instagram readers are asking: “How can we accept evil?” You answered: “There is no evil. Evil simply points out to a person that he hasn’t reached perfection in goodness.

That is, concealed good is felt as evil. It is felt acutely so one will pay attention to what other possibilities exist for him to correct this property and turn it into good.”

One of your readers is asking: “What about rape? Abnormal behavior in our connections?”

Answer: This is egoism, it is excess. Of course, this is evil. But egoism must be corrected, and then there will be no evil. That is, this is an incorrect attitude toward another. The intention toward another is just intention. If it acquires either a positive or a negative form, then we have to discern and correct the “minus” into a “plus.” But the intention itself cannot be changed. In other words, we cannot castrate a rapist; we need to reform him.

Answer: How to do it is another thing. Actions will not change the world. We have to delve into the root of the problem, into why some people treat other people in such ways, and correct that direction,or in other words, his intention. This is what the science of Kabbalah deals with.

Question: Suppose someone commits violence against others. What does it mean to correct his intention, that the same actions of the same person would be beneficial to others?

Answer: Did he intend to hurt others? No, he wanted to fulfill himself. So let him fulfill himself through different actions: acts of kindness toward others. He needs to be corrected, reformed, and educated differently.

He will then receive the same pleasure, even a much greater one than he would have felt while perpetrating violence. Kabbalah can give him pleasure that is 620 times greater. Instead of violence, it will be acts of kindness toward another person, as that person will be enjoying it together with him.

Question: What accounts for such transformation in a person?

Answer: The upper force, the upper light. This is not a simple matter. Nor can the rapist do much about it. A person must be changed, re-educated.

Question: But what can be done?

Question: What happens to a person when his intention changes, when his attitude toward others changes? At what level does this change take place: chemical, psychological?

Answer: On the spiritual level. On the highest, most inner level. He has to change his attitude, his understanding of where he is: in a society, in the world, his attitude toward life and death, toward the whole universe, everything has to change inside him. This correction takes place under the influence of the upper light.

Question: Suppose a rapist wants to change his attitude…

Answer: Even if he doesn’t want to change, we will gradually influence him in such a way that he will want to change himself, and will be changed.

Question: What does it mean to influence him in such a way that he will change?

Answer: Through examples, education. It is an educational system that has to influence him over a long period of time. People that were sentenced to the refuge cities could not leave. If a person killed or harmed anyone, he could find a refuge there, turn himself in and admit his crime, and then the societies in the refuge cities would work on him.

How is this achieved? By inclusion into society. The collective works on attracting the upper light, and a person, by being in the society, whether he likes it or not, receives a portion of the upper light through it, and the upper light reforms him.
[246737]
From KabTV’s “News with Dr. Michael Laitman” 2/28/19

Filed under: Education, News - No Comments →

Question: How do you explain the phenomenon when you suddenly begin to understand?

Question: What does it mean to understand the Creator?

What attitude should a person establish from a young age toward others in order to build the right relationships with them and what emotion should we develop in order to succeed in finding a partner that suits us?

A man and a woman, like plus and minus, can form a spiritual connection over the opposites, above the human ego. Even during sexual intercourse, each one needs to be directed primarily at achieving the inner spiritual connection. The intensity of the joy of intercourse in the degree of the speaking is immeasurably greater than what we know of in the level of living. When I’m hungry for sex, I have to think about how I can, with the help of this urge, fill my partner up. Each one thinks only about how he or she can transcend oneself and give pleasure to their partner.
[124498]
From KabTV’s “New Life #264 – Sexual Development,” Part 2, 11/29/13

Writings of Baal HaSulam, “Preface to the Wisdom of Kabbalah,”  Item 50