Yesterday an international women’s virtual conference was held: “Creating the right, good environment.”
#Women today readily accept responsibility for the world’s #future.
For that they must rise above conflicts, make concessions and unite, turning the world into a warm home. 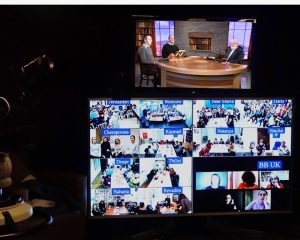 Don’t replace hatred with love—you’ll ruin the love!
It’s recommended to preserve everything bad, but learn to cover it with goodness, love.
Covering means maintaining their correspondence, being between them.
Then you’ll stand on two feet, growing both of these qualities.

What is required of me at the Congress?
To focus on the desire to reveal an inner connection that exists between all creatures. By revealing it, I’ll reveal all of creation and the Creator. For this sake I detach from myself, striving to immerse into and feel the reality of unity.

Mass immigration from the south is a threat to the US since it’ll bring democrats to power—forever.
Hence liberals desire migrants, no matter who they are. This gives them power over whites—and the USA will repeat the path of South Africa. The US has to focus on itself. America first!

The Torah tells a person about what is happening in him.
The point in the heart, Moses, is born from those who fled Babylon, but grows inside the ego—Pharaoh’s house.
Once ripened, he assesses Pharaoh as an evil ruler, separates from him, and then leads the people …
… all of one’s qualities, out of his rule.

The crisis will compel the world to realize egoism as the reason for the crisis.
Revealing a need to eradicate the ego,
Compelling people to gather into groups to draw the force of correction—
to the degree of efforts to converge according to Rabash’s articles about the group.
Or to die.
But we can come together ahead of time, before the suffering.

Self-criticism and dwelling on oneself aren’t qualities of a person who works on himself, but one who follows his ego’s whims.
Seriousness of the work is revealed in maintaining the greatness of the goal inside you—of attaining bestowal to the Creator.
This is possible only “From love for the neighbor (group) to love for the Creator.”

Realization of ego’s evil, Adam’s question to the Creator, “Will my donkey and I really eat from the same bowl?”—will I enjoy only bodily fulfillment? Where is man in me?
The Creator: The ego’s evil will be revealed. You will then earn your bread in the sweat of your brow” …
—you’ll reveal the Creator and become human.
From Twitter, 1/14/19