Jews Are a Worldview

Question: If the Jews must gather in one territory, in Israel, should something then replace this force that they transmit in other places? Or should some new form of interaction be built? What will it be?

Answer: I think it will be the spread of the Jewish ideology, the Jewish mentality, the outlook on the world, life, society, and relationships all over the world. This all will be spread all over the globe. After all, Jews are not a people, but a worldview.

Ideas emanating from one center will cover the entire world and will replace the egoistic force that now reigns in the world with the opposite one.

Question: Where is the right place for a Jew to live (not good, but right)?

Filed under: Israel, Nations of the World - No Comments →

The Orchestra Needs a Conductor

In the News (“A renowned orchestra proves that companies can thrive without a boss”): “A curious game of musical chairs happens every time the Orpheus Chamber Orchestra gets together. After every piece, the musicians shuffle positions, where a violinist in the front might move to the back so another violinist can take center stage. Unlike other classical music ensembles, the maverick New York City-based orchestra doesn’t believe in hierarchies, set seating positions, or roles. And it never performs with a conductor.

Switching seats several times during a single concert reveals Orpheus’s unique perspective on leadership. Instead of relying on a solitary leader wielding a baton or shining a spotlight on a handful of standout performers, Orpheus’s musicians seamlessly go from leadership to supporting roles at every turn.

Per its founding philosophy, Orpheus’s 34 core members resist the usual “corporate path” of symphony orchestras and consider each other equals. Except for the musician who does some advanced work to adapt a composition for the orchestra, each player—no matter their age, tenure or résumé—earns the same pay for every concert and has a voice in all creative decisions. The fellow musicians debate and fine-tune each piece as a collective. …

“Indeed, with many world tours, over 70 albums, and dozens of accolades throughout its 50 year history, Orpheus flourishes because authority and decision-making are shared among all members.”

Question: What do you think about this?

Answer: This is really unique, and goes against nature. In principle, the conductor is the upper force, the upper thought, the head of the orchestra. He connects them and unites them; he implements his will into them.

How they do it all without him, I don’t know, not even at rehearsals, not anywhere. They do not just want to show that they are playing the notes without a conductor. Probably they sit and sort out everything that is happening between them, and dig into the orchestral score.

Comment: But a person, by nature, has his “I,” has his leadership, has his suppression of others. Human egoism is the basis.

My Response: Yes, this is also egoism, but it is still unclear how they can do it without a conductor.

After all, they look at him all the time. He encapsulates them all, unites them, and coordinates them. How can they work without this?

Question: Tell me, please, are you saying that ideally, the performance of music is possible only with this force, so to speak, with a conductor who organizes all this business? What if he is nevertheless removed?

Answer: I cannot imagine. It is impossible to imagine any collective assembled from individual little egoists who would not have a conductor, a boss, or a leader, that is, an upper will that would guide them.

How do they feel this? Of course, they feel each other and themselves more and make some internal corrections and movements, but of course this is very difficult. It would be interesting to talk to them.

Comment: If so, what unites them? Could you please say what it would be, ideally?

My Response: It is the fact that each of them should be a conductor in some way. Through their inner desires, their inner heartbeats, they want to connect and thus manage themselves together. This is a very big job, very difficult. There must be a contact of hearts!

I cannot even figure it out. Musicians? They are each, in general, within themselves.

Even if they want to combine themselves, how do they do it? How do they work in unison? What kind of metronome?

Question: Are you saying they have to look at some single point all the time?

Answer: The conductor is everything.

Question: Suppose this is the way they are; where are they looking?

Filed under: Music, News - No Comments →

You Cannot Do Without the Human

The technique will be so perfected that a person can do without himself
(Stanislaw Jerzy Lec).

My Response: I do not think we will live to see this and in general that such a state will exist because we cannot do without our inner, spiritual selves. Otherwise, who are we? Are we only going to work for the physiological body?

My Response: Which means what I will do is connect all sorts of machines and all this will function by itself? And my “I,” my thoughts, desires, and dreams, all this? What about my “I”? Who will lead it? Who will revive it?

Question: You are saying: “It is impossible to do without oneself.” What is the “I” that I cannot do without?

Question: So there will be no relief here for a person in this work?

Filed under: Body and Soul, News - No Comments →

How to Deserve a Good Attitude from the Creator

On one side stands the Creator, on the other side I am, and between us in the middle is this torn, disassembled world. When I collect it more and more, like in a kaleidoscope, I gradually reveal the attitude of the Creator toward me.

Question: Is it good?

Answer: For this, I need to make myself good and then I will be able to see through this kaleidoscope, how it assembles everything correctly.

Question: What is “I am good”?

Answer: “I am good” is the one who sees only good in everything that exists in the world, the manifestation of the Creator. This is not easy. But this is what we must come to. Everyone should try to assemble the image of the Creator.

Question: Behind everything that is going on? Behind absolutely everything?

Answer: Of course, behind everything. As soon as my attitude changes like this, perfection will immediately be revealed.
[301673]
From KabTV’s “News with Dr. Michael Laitman” 6/2/22

Related Material:
Do Not Obscure the Creator with Yourself
World, Like A Blossoming Garden
Loss of Identity

Question: Why are people always eager to lose weight?

Answer: Because weight-loss products are more expensive than weight-gain products. And so, someone is profiting from them.

Question: But in reality, what is the problem with being overweight?

Answer: It is very easy to get fat from today’s products, but it is very difficult to lose weight. Therefore, weight-loss is taken as a cult, as some kind of high achievement.

In fact, it has no bearing on anything, and people do not live longer, do not become healthier. It is just taken as a form of worship. I think it will pass soon. Any kind of violence against yourself is not good. A person should be normal. But no one knows this norm and cannot establish it. It is just that a person should eat normally.

If we get rid of all the excesses that flood our food markets and everything else and come to a rational way of life, then everyone will have a normal weight. Well, you will weigh not sixty kilograms but seventy. Your measurements will not be 90-60-90 but a couple of centimeters more. So what? You will not have plastic surgery because you will begin seeing not the appearance of a person but his inner world.
[301713]
From KabTV’s “I Got a Call. Why Lose Weight” 3/3/13

Filed under: Health, Q&A - No Comments →

Why We Believe Scammers

“Two men have been arrested in the Indian state of Uttar Pradesh for allegedly duping a doctor into buying an ‘Aladdin’s lamp’ that they promised would bring him wealth and health.

“As part of the con, they even pretended to conjure up spirits from the lamp, in line with the tale from The Arabian Nights, Indian media report. …

“A senior Meerut police officer, Amit Rai, told NDTV that the same men were suspected of cheating other families in similar ways.”

Question: I would like to know what is in people’s minds? How can we believe in this nonsense and pay out large sums of hard-earned money? Tell me, how does this happen?

Answer: People want to believe in a miracle. I’m going to rub this lamp and a genie will appear and he will follow my instructions.

Question: Is this the most important point?

Answer: No, I think that’s the next step. The most important thing is for the genie to appear.

Question: So we are ready to pay for this miracle?

Question: So why don’t we want this miracle?

Answer: Firstly, we don’t believe. It’s easier to believe in a genie. It’s not that simple.

Question: Then how do we make ourselves want this miracle of the upper force, the Creator, to manifest itself?

Answer: Prove that you want it! Lay yourself out. Beg the Creator. Find out how you can summon Him and it will work.

Question: What should I rub in order to summon Him?

Answer: Yourself. Purify yourself.

Answer: From egoism, of course.

Question: Does He not manifest Himself because I’m full of egoism?

Answer: Certainly. You don’t feel Him. He is around you and you are in Him, but you don’t feel it because you are all covered with egoism. You have to wash yourself thoroughly, wipe yourself of egoism, then you will begin to feel that the Creator is manifesting Himself.
[301611]
From KabTV’s “News with Dr. Michael Laitman” 7/7/22

Related Material:
Interest In The Otherworldly
Why Do Miracles Attract Us So Much?
Have Miracles Ever Happened To You?

Filed under: News - No Comments →

Lesson on the Topic, “Reinforcing Ourselves with There Is None Else Besides Him”

Writings of Baal HaSulam, “Concealment and Disclosure of the Face of the Creator-2”

“What do you think of the US-led air defense alliance with Israel and Arab countries?” (Quora)

Michael Laitman, On Quora: “What do you think of the US-led air defense alliance with Israel and Arab countries?“

Such agreements are unreliable in the long term because lasting peace requires the Jewish people to first and foremost develop peace among each other.

As is written in The Zohar, “No calamity comes to the world but for Israel.” We are to blame for all the wars, collisions and difficult situations in the world because we represent the nations of the world toward the single upper force. If we positively connect, then we will see calm, peace, goodness and tranquility throughout the world, and if not, then we can expect increasing problems and crises.

Therefore, we should first establish an “alliance” among each other: that we live with each other according to the condition, “Love your neighbor as yourself.” The alliance we now entered—and all such agreements—hold positive effect solely in order to eventually bring us to the need to develop relations of “Love your neighbor as yourself,” by which we can secure for ourselves—the people of Israel, and then also humanity—peace and tranquility. 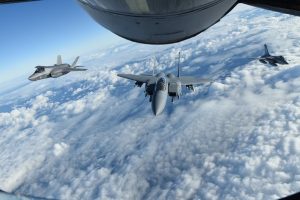