Everything Is Only For Good

Question: Can the wrong path affect in my feelings? For example, I am a total egoist and I don’t want to see or hear anyone. So suppose the system takes away my hearing, my ability to listen attentively, or even my sight, so that I will relate to others more attentively, read lips etc.

Answer: You don’t need to pay any attention to what the system does with you because you don’t know why all this has been prepared for you. Only later will you see that it was for your sake. You need to do everything only in order to find connection with the friends and, by studying the wisdom of Kabbalah, to reveal the upper world in this connection.

Perhaps at the moment you don’t understand how the upper world can be revealed between you, but when you begin to create the network of mutual actions between you, it will become the vessel of the soul, which means the place in which the upper light, the upper system, the upper knowledge, the upper feeling, will later be revealed. 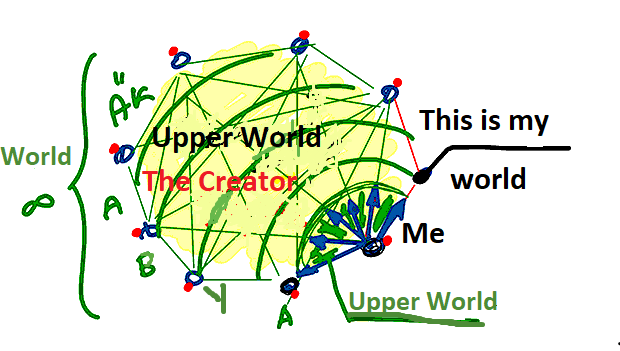 This is how you will begin to reveal the upper world in the connection, break away from the self, and exist in the general system.
[241037]
From KabTV’s “Fundamentals of Kabbalah” 11/18/18

Related Material:
Consequence Of Advancement
The Desirable Way To The Goal
What Is Predetermined For A Person?

The Difference Between Moral Principles And Moral Norms

Question: There is a difference between moral principles and moral norms.

A moral norm is, for example, to give up a seat on public transport. Moral principles include humanism, altruism, collectivism, justice, mercy, peacefulness, patriotism, and tolerance.

Answer: Yes, they are less specific. We should learn to realize them inside ourselves by building an internal system of our thoughts and interactions. Then, we can gradually come closer to their implementation.

All sorts of norms, such as giving up your seat on public transport, have nothing to do with the correction of a person. These norms are intended to make a social product out of a person and nothing more. This is not what the science of Kabbalah implies. One follows some principles that one was taught but, at the same time, one do not correct oneself.

Question: What if it comes from love for your neighbor?

Answer: This means that it comes from selfish love for one’s neighbor. We must clearly understand the reason for our actions. Is it an attitude toward a common connection into one unified system with the comprehension of its unified higher power, or is it giving the human community a more decent look?
[274958]
From KabTV’s “Communication Skills” 10/9/20

What Does It Mean To Exit Yourself?

Question: Sufferings come because of the difference between what is desired and what we have. How can we learn to appreciate what we have correctly?

Answer: To do that, we must gradually understand what exiting yourself means.

If the connection with the friend becomes that important, it means that you rise above yourself and thus exit yourself. To that extent we can feel that the Creator is between us.

Related Material:
How One Develops The Sixth Sense
The Way To The Final Correction
A Group Of Ten As A Tool For Adhesion

Lesson on the Topic of “Concealment”

On The Verge Of Entering The Spiritual World

Question: What does it mean that we don’t remove egoism,, but build small bridges of connection over it instead? If I change my focus above the unfolding egoism, aren’t I still somehow transforming it?  Or does it just seem to me that way and it actually remains the same?

Answer: On the verge of entering the spiritual world we begin to feel problems in our mind and feelings. It is similar to the way physicists discover the duality of light: the structure of its particles or its wavelike structure.

Electrons and photons behave as either particles or waves depending on whether a person observes them or not. This means that we understand that it does not depend on physical laws, but on the laws of our perception.

In physics there is evidence and trials that indicate that we don’t totally understand what we are dealing with. Although in physics it is all expressed in formulas, in graphs, in the movement of needles on a meter, or the flickering of numbers on a screen, we still don’t understand what is actually happening.

Our corporeal mind is built on absolute egoism, and it cannot understand and perceive anything that is opposite to it, when it is built on anti-egoism. Moreover, it isn’t just anti-egoism, the mere change of plus to minus, I think one way and you think differently, on one hand from the perspective of your ego, and on the other, from mine, from the perspective of my egoism. This yields nothing.

The point is about being in the same object, in one desire in which there are two kinds of feeling, one that is egoistic and another that is in contrast to it, but they both exist simultaneously in the same object. There is a good example from the Torah for that, when the Creator tells Abraham, “it is through Isaac that your offspring will be reckoned,” he is your future and he will lead humanity forward toward the goal. And shortly after He adds, take him and kill him, “sacrifice him there as a burnt offering.”

How can these two opposites coexist? Of course there are superficial commentaries about it, that through death he seemingly reaches another life.

But we need to understand that it is about a totally different perception, a different matrix, and that opposites cannot only coexist, but they also complement each other and still remain opposites.

When we speak about oppositeness we mean that if one exists, the other also exists, and vice versa, although we don’t understand how they exist. For this, the upper light must descend on us, expand our concepts, sensations, and when they become spiritual, we will realize it.

Unless we do that, we cannot do anything. See what happens in Israel before the elections, 20 different parties fight with each other and are ready to devour each other. See what happens in Europe and in the whole world. This is only the beginning. We will see such problems that we will not be able to solve on our earthly level in any way. No way!

The point is that providence is bringing us closer to each other, are we are unable to find any common ground because the egoism of each state, each nation, is constantly growing. If in the past we were able to draw away from each other according to the growing egoism, now providence is pressuring us, pushing us toward each other, and we cannot change that.

We can either begin to demand that our perception of the world be changed to a true, spiritual perception, or we will bring ourselves to war by getting closer together linearly. It is because there will be no other way if we are constantly pushed closer together and at the same time remain increasingly more opposite to each other.

The Creator operates on us by two forces, from the inside and from the outside. On the one hand He develops the egoism in us, and on the other hand He pushes us increasingly closer together. If in the past we lived at a distance from each other and would connect only when necessary, today we are in one common backyard.

At the same time, only those who are in the right state will turn to Him. You cannot just cry out to Him. People have been crying out to Him for ages uselessly.

According to the wisdom of Kabbalah we need to gather in tens and to create the right atmosphere in them, in which we would like to find a solution to the problem: how a ten can become one whole?

The whole world will be divided into tens and thus everyone will be corrected. It may seem to us that we are building tens, but in fact it is not so. In the future we will find out that providence is instilling all these thoughts, feelings, and decisions in us.
[241589]
From KabTV’s “Fundamentals of Kabbalah” 2/6/19