Question: There is a point of view that suggests that some moral principles are a part of the biological nature of man. Researchers argue that the formation of moral judgements among people of differing sex, age, and culture can differ significantly. Do you think these parameters affect moral principles?

Comment: Researchers have discovered that acting in accordance with accepted moral norms increases people’s resistance to stress and strengthens their physical condition.

My Response: Undoubtedly, if I were sure that my actions were supported by moral foundations, principles, and agreements of society, then I would feel much more confident.

Question: Neurophysiologists argue that the moral judgments of people can be influenced by changing the activity of certain areas in the brain. It seems as though all talk of morality will soon stop by itself and the morality of society will, instead, be formed with the help of two electrodes. Do you think it is possible to change the moral principles of a person through external influences?

Answer: No. With the help of electrodes, it seems, you can control some forces. Who actually controls them? You cannot get to this answer. There is the basis of all human morality.

Question: Experts at Harvard University conducted a series of experiments that concluded a person’s moral principles change during the day and weaken in the evening. Therefore, they recommend making important, morally difficult decisions during the morning. What is your opinion?

Answer: It depends on the physiology of the person. There are people who do not think at all in the morning; they think better in the evening or even at night.
[275236]
From KabTV’s “Communication Skills” 10/8/20

Related Material:
Calculation Without Poetry
What Defines Morality?
Why Ethics Are Irrelevant

The place for revealing the Creator emerges in me in the place where I set myself aside and allow the friend to enter. In this place I am restricted, and the friend enters. Then I can reveal the Creator in that very place. This is called “from love of creatures to love of the Creator.”

If I am developing spiritually, then I am happy when I envy the friends, because that is how I reveal forces within me to advance forward. But if I don’t want to see their accomplishments, to avoid suffering, it means I don’t care about spirituality! I must therefore check: do I feel envy or do I instinctively cover it up to avoid suffering?
From Twitter, 12/19/20

Filed under: Spiritual Work, Thoughts on Twitter - No Comments →

Question: 200 years before its destruction, the Temple was desecrated. From the spiritual point of view, desecration means that people have discovered the Greeks, egoistic desires, within themselves.

At the same time, other desires, called the Maccabees, appeared among people who rebelled against the “Greeks.” In honor of the rebellion of the Maccabees, who purged the Temple, the celebration of Hanukkah began. What does this holiday mean?

“Hanukkah,” from the word “Hanaya,” means a stopover, i.e., a transition from one action to another. The desires to bestow are easier to correct. Therefore, Hanukkah is the festival of light.

Question: It turns out that spiritual states can be viewed from different points of view. On one hand, these are historical events. On the other hand, a whole nation passed through these states. And third, each person within himself must go through the same states. Are these all identical?

Related Material:
Hanukkah—Striving To Unite
Hanukkah Is A Way Out Of Darkness
Hanukkah – The Miracle Of Unity

Where Do Spiritual Feelings Appear?

Question: How are external communication and attempts to connect between us
related to the potential development of my inner spiritual feelings?

Answer: Your spiritual feelings will be revealed solely and only in your
connection with others and not within yourself. 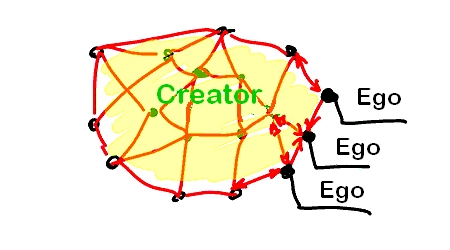 Where is the Creator? Where is the common spiritual field? It is between us and not in any one of us! If you remember this very well, you will not make a mistake.
[241074]
From KabTV’s “Fundamentals of Kabbalah” 11/11/18

Related Material:
Attack On The Fineness Of Feelings
Many Roads Lead To The Creator
Breakthrough Via The Shared Center Of The Circle

According To The Original Desire

The wisdom of Kabbalah is revealed to humanity gradually. The first Kabbalist to attain it was Adam, a Kabbalist who lived 5,579 years ago. But it was revealed more explicitly through Abraham, about 3,600 years ago.

Today the wisdom of Kabbalah is going through a very interesting phase of becoming familiar to humanity.

In the past, it was known only to a few Kabbalists who were secluded and apart from the rest of society, but today it begins to gradually spread all over the world. This is the reason we also participate in and are witnesses to a unique phenomenon in which the essence of the world we live in, the cause and effect of our existence, and the plan of human evolution are gradually revealed to humanity.

There are people who are not concerned about anything other than themselves. There are those who care about their family, the society they live in, etc. Those, on the next level, are concerned with the Earth, the planets, and space. At the same time, they are not interested in breaking through the frameworks of this world. There are those who want to reveal and to know what happened in the past and what will happen in the future.

It is actually the principle of the global, integral connection of all of nature that they find most interesting of all. They want to know how everything is connected, why, for what purpose, and how one component responds and manages another and impacts all the other parts. They have such a big desire that they want to know and to attain the general system, the general schema, the general structure, of everything there is, not only in our world, but also beyond this world, and they cannot find peace in ordinary life.

By trying to resemble others, they try to engage in all sorts of corporeal problems, but this does not last long. The first chance that fate brings an opportunity their way, they immediately fly somewhere, which means that they cannot engage in daily problems.

They are more concerned with problems that are not even on a cosmic scale, but above that (which means with problems that the word “everything” incorporates). It is not space, not our world, but something whole. Such people who do not settle for a general idea—they find it troubling and it gnaws them from the inside—reach the wisdom of Kabbalah.

This question does not necessarily reach its maximum level in each and every one of them, but it is still a bit higher than our world. There are questions of a lower order, when people are interested in knowing what determines things like their health and their fate. They are fond of mysticism or start practicing folk medicine, etc.

Thus, we begin to revolve around the wisdom of Kabbalah from below, from the lowest beastly level, all the way to the highest level in which a person feels the need to sense and to attain the whole creation, the whole system and its leadership.

There are different upgrades of desires, and therefore many reach the wisdom of Kabbalah, but once they hear that it is about the highest levels, they understand that it is not for them because they are more interested in the corporal implementation of both mankind and of the wisdom of Kabbalah. They accumulate some knowledge and move to their level.

This is actually how it has to be. This is the reason that we never force anyone to stay, those who come, or those who leave, since it is their private business. Each one should find his balance in this system, on all the levels of the attainment of creation and according to the demand of one’s soul, which means of one’s internal, original, personal desire.

Related Material:
Who Is Predisposed To The Wisdom Of Kabbalah?
How To Attain A Soul?
Decide For Yourself

Filed under: Dissemination, Egoism - No Comments →

Lesson on the Topic of “Envy”