What Made Hitler An Anti-Semite?

Hitler saw that he could unite the people through anti-Semitism, and that he gained a lot of support through his anti-Semitic actions, and these were the stepping stones to Hitler’s becoming an anti-Semite.

Countries such as France, England and Poland, who were hostile to him and who he couldn’t conquer yet, agreed with him on his anti-Semitic stance, and thus he used anti-Semitism to rise above the people, unite the people, and to take the wealth of the Jews. He also publicized his actions against the Jews as much as possible, because he saw that the people agreed with and encouraged his anti-Semitic actions. Eventually, he became a true anti-Semite, even though he wasn’t one to begin with. When he started rising to power in Nazi Germany, there were even many Jews and the fathers of Zionism who supported him. In short, in terms of whether Hitler was an anti-Semite, he wasn’t one in the biological sense, where he felt a natural hatred of Jews from within. He became one as he saw that it garnered him a lot of support. 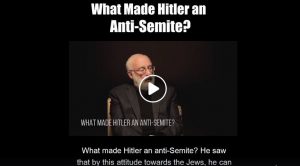