Question: How can we say that we are creating the Creator?

Answer: Of course, we create the Creator. There is an upper force around us called Atzmuto, (in Himself). This is not even the Creator but simply an upper force under whose influence the creation appears in the universe, a Kli (vessel), the desire to receive. 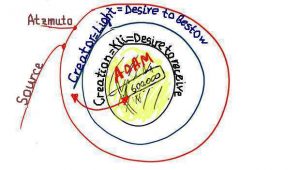 We do not deal with the Atzmuto itself because this is an abstract force called “the root cause,” which created a second force. The second force is the Creator, the light, the desire to bestow.

We, the creation, are currently totally broken into 600,000 main components, which in turn is fragmented even further into billions of particles.

If we unite among ourselves, then gradually, to the measure of our connection, we begin to feel the Creator within us. Meaning, we “create the Creator,” we manifest Him within us. And outside of us, we do not even know whether He exists or not.

Therefore, it is all about creating such a system between us that allows the Creator to manifest Himself.
[253157]
From KabTV’s “Fundamentals of Kabalah,” 7/28/19

Related Material:
Create The Creator Within Yourself
You Create Me
The Method of Revealing The Creator

How Not To Be An Idol Worshiper
Podcast Powered by podPress (v8.8)