From Rockets to European Labeling of Israeli Products. When Will Threats Against Israel Stop?

Around 450 rockets have been fired at Israel in the last few days and still counting, despite the announcement of a ceasefire between Israel and the Palestinian Islamic Jihad. Beyond the headlines, residents in the south and center of the country, the areas directly under attack, are paying a heavy price, living in constant fear and uncertainty about the future.

Are we on the road to an escalation or is the current menace one that will die out soon? Either way, we have not solved the root of the problem, nor does it seem that a solution looms on the horizon. Our fate depends only on us, the people of Israel, on our unity.

Life in Israel is similar to living in a fortress, always on the alert against enemy attacks. However, we do not enjoy protection from any enemy: not Hamas and Islamic Jihad in the south, not Hezbollah in the north, or even from a Russian submarine that was recently located off the shores of the center of the country. If we widen our gaze, we will realize that the attacks come from all fronts. The European Court of Justice decided not to allow us time to even recover from the wounds of the current rocket attacks before inflicting a new blow. The EU’s highest legal court adopted a resolution stating that the European countries are obliged to mark any product originating in the Israeli settlements—territory that Israel captured, the West Bank and East Jerusalem in the 1967 Middle East war, areas disputed by the Palestinians—so consumers could make “informed choices” when they shopped.

The court’s ruling has been considered anti-Semitic and discriminatory by Israeli authorities and producers, since Israel is the only country that has been singled out, despite the fact that there are over 200 territorial disputes around the world; the labeling measure only applies to Israeli goods.

How Should Israel React?

Wars in the field and in judiciary courts, ground attacks and psychological warfare, will be of no help. Nor will idleness. When the nations of the world rise against the people of Israel in one way or another, the only viable solution is to access our common arsenal: the power of unity. Therein lies a more supreme power, stronger than all our current forces. As the sages wrote: “The prime defense against calamity is love and unity. When there are love, unity, and friendship between each other in Israel, no calamity can come over them.” (Maor Vashemesh)

We ought to listen attentively to the message the world is screaming at us. We need to peel off our thick layers of stubbornness and absorb the essence of the demand coming at us, the reason an accusatory finger is pointed toward Israel. What is the world requesting? They are asking only for good and fulfillment.

Access to that good depends on the Jewish people. The key is in our hands. If we are united in one heart, we will be like a conduit of supreme power to the nations of the world. It will be through us that the good, the abundance, and the love for all will pass, without exception. In this way, without a lot of words and without noise, we will be recognized as “light unto the nations.” This is our unique virtue and role as the people of Israel. As the Kabbalist Rav Yehuda Ashlag (Baal HaSulam) wrote: “The Israeli nation had been constructed as a sort of gateway by which the sparks of purity would shine upon the whole of the human race the world over.” (The Arvut – Mutual Guarantee)

Light on the Horizon

We do not need another day of rockets or more sorrow of children crying in shelters before we react. We must undertake an incisive analysis now in the spirit of the saying, “the end of the action lies in the initial thought.” And the final outcome should be to unite as one, above our origins, ideologies, and preferences, to foster unity as a nation showing a positive example to the world.

Repairing the world on all levels begins with our connection, the connection within the people of Israel. If we establish unity as a distinct trend, we will bear witness to a positive transformation throughout the world. As the wisdom of Kabbalah describes, the solution to our situation, whether negative or positive, belligerent or friendly, depends exclusively on us. The solution lies in our hearts, in our desire to either unite or not unite.

By virtue of our connection we will awaken great, unifying forces dwelling in nature that will affect our surrounding world in a harmonious way, and everything will calm down. Forces that currently oppose us will be reversed. Today’s enemies will approach us with love, and peace will reign. 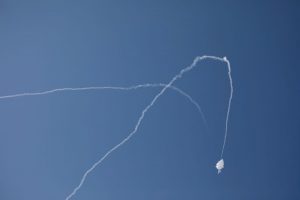 New Life 1163 – Relations Between Europe And The Jews

New Life 1163 – Relations Between Europe And The Jews
Dr. Michael Laitman in conversation with Oren Levi and Nitzah Mazoz

The Jews must bring the system of connection to Europe because without it Europe will fall into an abyss. Throughout the generations, the Jewish people were close to the governments and churches in Europe. Trade relations were easily developed and, in the 18th century, Jews became even more involved among the nations, philosophers, scientists, bankers, and management. As Europeans developed, they realized that they could not compete with the Jews and therefore wanted to eliminate them from among themselves. Many people hated the Jews because they were opposite to their religion and culture. According to the wisdom of Kabbalah, the nations of the world feel that the Jews have a secret for a good life and will not reveal it. The secret that lies with the Jews is how to connect above the mutual rejection that exists between us and to earn a good living.
[253996]
From KabTV’s “New Life 1163 – Relations Between Europe And The Jews,” 10/10/19

Protests Vs. Cooperation: What Will Make Governments Listen To People’s Needs?

Mass protests are shaking the planet. Can protests really affect change in the world? What are people lacking in order to get into the right cooperation with the countries’ governments and make them really work for the needs of a particular society and the world as a whole?

The answer is connection. Protests give people a certain kind of unity, but it is a unity that is induced. They have an announced goal, several mottos, and blinding emotions. The main point of protest is “against,” not “for.” Therefore, those who come to protest connect around their personal hatred regarding something, or because of the external threat. As soon as it’s gone, or “a dog is given a piece of food” to calm down, the artificial unity disappears as it never existed before.

Can we get out of this locked circle?

Yes. Just as how hatred nourishes hatred, love nourishes love. Therefore, if people connect “for” something—a common goal aimed at building a new prosperous society—and show the government their unity “as one man with one heart,” their needs and requests will be immediately met and fulfilled.

How do we find that point of “for” unity? The wisdom of Kabbalah teaches us about it. See Less

Our World Is An Imprint Of The World Of Assiya

Question: Our world is part of the world of Assiya and, at the same time, as if part of the spiritual worlds. But they differ in the degree of bestowal, which does not exist in our world. Is it possible that, perhaps, our world came into being separately, not as part of the spiritual? After all, here is a different quality of existence. Why is it included in this system?

Answer: First of all, it is written by Baal HaSulam. This is the first and very simple answer. I always refer to the sources.

In detail, our world and the spiritual world are absolutely identical. But to say that our world was created separately is impossible. You can imagine anything you want. We take what Kabbalah says as a foundation. This is all I can say.

Read the sources. Everything is described there and explained a little more than we analyze in lectures. I believe that you just need to simply chew all this yourself, swallow and digest it.

When we talk about the similarity of our world to the upper world, we mean only its structure, not its qualities and its management. Although our world is an imprint of the upper world, it is made from totally different material. The spiritual world is the material of bestowal, love, and connection and our world is absolutely opposite to it, egoistic.
[254294]
From KabTV’s “Fundamentals of Kabbalah,”, 6/10/19

Related Material:
All The Worlds On One Skewer
The Reality Of The Upper Worlds
Unified World System: Physical Or Spiritual?

How To Bring The Planet Into Balance

Nature plays a dangerous game with people. While a rare hole in the ozone layer becomes smaller, the general system is still unpredictable. Natural disasters and catastrophes can suddenly trigger mass tragedies and disruptions to people’s plans.

However, is it nature in and of itself that gives us a headache, or are we people influencing nature in a way that makes nature appear imbalanced toward us, and all disasters are just a response to our actions?

According to the wisdom of Kabbalah, there are four levels of nature: inanimate, vegetative, animate, and human (speaking). Each next level controls and influences the previous one. Following this logical chain, human beings are at the top of the hierarchy, and thus, we are responsible for all that we face. Nature’s balance depends on balance in human relations: If people reach a state of mutual consideration and consent, nature will come down.

Therefore, we need to recognize and understand our responsibility and start building positive human relations above the contradictions that we meet in contemporary society. By doing so, we will bring the planet to harmony.

Question: If the world is a reaction to forces, does it mean that I am also only a reaction? If this is so, then what is this I that is attaining all this?

Answer: Indeed, I am a reaction to what I produce. I feel myself as one form or another.

My head, body, feelings, heart, and so on are all my automatic, natural, instinctive reactions to what affects me and eventually gives me a sense of myself, my body, my thoughts, and feelings.

I do not know who I am. I am inconceivable just as the Creator is inconceivable. We attain only our reactions to something around us.

Then, as we attain more, we will see that in fact, we are attaining the upper light. It gives us a sense of ourselves and the world around us. Gradually it will come to us.
[253703]
From KabTV’s “Fundamentals of Kabbalah,” 9/15/19