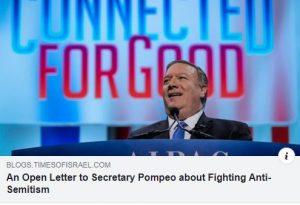 I appreciate that your office is allocating funds to fight anti-Semitism around the world. As we saw at the recent AIPAC gathering, anti-Semitism appears to be the only issue that truly unifies the Jewish people above the bipartisanship that is tearing society apart.

There is a vast amount of resources, time and energy being invested in such gatherings of Jewish leaders, while anti-Semitism continues to escalate on both sides of the Atlantic, and shows no signs of slowing down.

In November 2014, I was interviewed by Larry King about the rise in anti-Semitism. From Los Angeles, I headed to Washington to attend the Israeli-American Council (IAC) conference. In my speech there, I explained how anti-Semitism would spread from Europe to America in the coming years. Not only did the distinguished members of the Jewish community disagree with me, they did not want to even hear of such a potential scenario. “That will never happen in the U.S.,” I was told.

Yet sadly, here we are five years later, and anti-Semitism is spreading quickly in North America. It is spreading wherever there are big Jewish communities, in schools and on campuses – suddenly everyone is talking about anti-Semitism.

For the last two decades, I have been at the helm of a nonprofit educational organization that has been dedicating considerable resources to spreading information about how to fight anti-Semitism in a new and unconventional way.

In my view, the whole premise of how we are trying to fight anti-Semitism is wrong. We are looking for ways to silence the hatred, rather than understanding where it emanates from. Without understanding and treating the root of the problem, hatred of Jews will continue to bubble under the surface, and erupt on the face of it.

The ancient wisdom of Kabbalah uncovers the little-known root of anti-Semitism: It explains that the Jewish people is a group that was created in a unique turning point in human evolution, some 3,800 years ago.

Following the evolution of the human ego, Abraham gathered around him representatives from the various groups and clans who lived in ancient Mesopotamia, and built them into a group capable of enhancing human connection over the growing ego, so as to discover nature’s higher force of oneness.

The group found itself growing in dissonance with the rest of human society, and ultimately, they abandoned Mesopotamia. From that point onward, the Jewish people and the other nations separated and continued to evolve on two parallel axes, and at that point, anti-Semitism was born.

Anti-Semitism has never disappeared ever since. It only morphed and mutated throughout history like a virus that never goes away. Jews continue to evoke a unique, negative sentiment throughout thousands of years of their existence, since they carry a method that the whole of society needs in order to rise to a higher level of connection.

Today, both Jews and anti-Semites do not recognize the natural dynamic that activates them. This is why this explanation is so vital. Only the understanding and awareness of these natural foundations can serve as a basis for solving the problem of anti-Semitism. As soon as the explanation permeates the public discourse, the anti-Semitic flames will subside.

In response to your announcement to increase awareness and law enforcement training, I offer a special training that would educate both Jews and non-Jews alike on the root cause of anti- Semitism. This can be implemented immediately in the U.S. and Europe.

Finally, I leave you with an important message for the future: our world is becoming increasingly interdependent, and very soon, everything will depend on the quality of human connections. The authentic wisdom of Kabbalah, which was at the foundation of the Jewish people, holds the key to bring about a new level of unity among people, and thus help usher in a new era for humanity.