$2 million is the amount allocated by the U.S. State Department for two projects to combat the growing anti-Semitism in Europe and Central Asia.

This proposal itself highlights the problem with the approach to anti-Semitism. The premise is wrong. We are trying to fight anti-Semitism instead of understanding the reasons for it. We are looking for ways to silence the hatred, rather than understanding where it emanates from and thus alleviate the problem.

Anti-Semitic incidents are like a messenger carrying a message: The relentless negative sentiments toward the Jewish people demand a deep and satisfactory explanation. Without it, the hatred will continue to bubble under the surface, and erupt on the face of it.

Instead of “killing the messenger,” we should invite him to a discussion about the source of the hatred and the solution for it. Instead of trying to blur the phenomenon, we must agree that it’s there and it needs to be understood.

The ancient wisdom of Kabbalah, which is being revealed nowadays, provides a systematic, comprehensive explanation for the phenomenon of anti-Semitism. An explanation that binds together the development of humanity from the dawn of civilization, human nature and the psychology that operates it, the birth of the Jewish people and the nature of its relationship with the rest the nations. Simply knowing the explanation will cause an immediate alleviation of anti-Semitism, since “a disease known is half cured.”

And here is the explanation in brief: According to Kabbalah, humanity reached a unique turning point about 3,800 years ago in ancient Mesopotamia, as human nature evolved to a new level. After thousands of years where human beings had an instinctive connection to each other and to nature, humans began to develop their sense of self. In Kabbalah, this is referred to as “the evolution of the human ego.”

As a result of the growth of the ego, human beings became more individualistic and egocentric, society became more complex, and human existence required the formation of deeper and stronger connections between people.

Abraham, who is known to this day as the common ancestor of the three major religions, had discovered the dynamics of human evolution: Nature continually increases the human ego, thereby allowing humans to form a more conscious connection, above the growing ego. This is how nature advances the human species to become a more conscious, more intelligent, more advanced form of life. In other words, nature increases the ego – and human beings are driven to increase their connection.

Abraham gathered around him representatives from the various groups and clans who lived in ancient Babylon, and built them into a group capable of enhancing human connection over the growing ego. The group abandons the Babylonian kingdom, grows to the scale of a nation, and acquires the name “Am Yisrael“. From that point onward, the Jewish people and the other nations separate and continue to evolve on two parallel axes.

For some 1,500 years the Jewish people lived according to the Abrahamic principles, until human egoism grew to a new level in humanity as a whole. At this stage, the Jewish people lose the special bond that binds them together, and begin to scatter and roam the world. In other words, the Jews lose contact with the system of connection that has accompanied them since they were founded as a people.

In the last two millennia, humanity has evolved through various forms of social regimes, trade and commerce, science, education and culture, all the while becoming interdependent across the globe. And in the last century, the human ego has reached its final peak, and is now leading human society towards an unprecedented global crisis: the family unit is disintegrating, the pubic loses trust in all forms of government, economic inequality reaches new levels while technological unemployment is around the corner, nuclear and climate threats are rising, drug addiction and depression rates are soaring, and the list goes on.

All the above are pushing humanity to rearrange itself around the planet, which in fact requires a new level of human connection. And the way to do it is the same as that which took place in ancient Babylon. The method for increasing human connection lies within the Jewish people who are scattered throughout the world, and this is why the Jews evoke a unique and negative sentiment throughout thousands of years of their existence.

Both Jews and anti-Semites do not recognize the natural dynamic that activates them. This is why this explanation is so vital. Only the understanding and awareness of these natural foundations can serve as a basis for solving the problem of anti-Semitism. As soon as the explanation permeates the public discourse, the anti-Semitic flames will subside.

The U.S. State Department’s $2 million would be helpful if it would be put toward spreading the explanation for the root cause of anti-Semitism, to Jews and non-Jews alike. 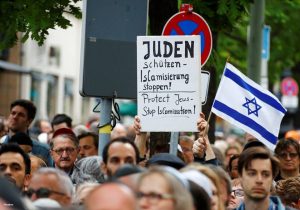 “How Trump Can Help the Chosen People“ (Breaking Israel News)