And a new king rose to power, and his name was Trump. And he ruled Israel with an iron fist, imposing economic sanctions on its citizens and stifling its international trade. And the United Nations celebrated as they finally managed to delegitimize Israel.
***
Such a horror scenario seems far from today’s reality. Trump is seen by many as an avid friend of Israel in a world that is becoming increasingly hostile toward it. However, the man who declared Jerusalem the capital of Israel, who continues to protect Israel’s position in the international arena and who cherishes the Jewish people – is certainly holding the reins. With each passing day, Israel’s future seems to be dependent on his continued support.

But behind the show of sympathy for Israel, Trump is a shrewd businessman. Like a good salesman, he first grants you a sweet taste while making sure he can demand a handsome payment afterwards. In his outlandish way, Trump is paving the way – on both the Israeli side and the Palestinian side – for a peace deal that could grant him a level of prestige that no U.S. president has ever achieved before.

However, Trump is destined to fail in this area just like all his predecessors did. Peace between Israel and the Palestinians is possible only if it is based on the laws of nature.

According to the wisdom of Kabbalah, peace between human beings in general is only possible through the activation of nature’s inherent binding force, and any plan that doesn’t take it into account will fail.

The people of Israel are the only nation founded on unity that’s based on the laws of nature. They lived by the natural system of human connection for hundreds of years until they went to a long exile, wandered the world and lost their foundation.

The creation of the Jewish people was nature’s way of making a mini-model of unity among humans that would later be extended to the whole of humanity. Therefore, Israel’s conflicts with its neighbors and with the rest of the world will gradually escalate until the people of Israel fulfill their natural role.

Thus, the only way to achieve a viable, lasting peace agreement is to first reawaken the foundation of the Jewish people. Otherwise, Trump’s efforts will fail miserably, and he will gradually change his attitude toward Israel.
So, going back to the negative scenario we began with, Israel’s troubles will intensify to an unbearable degree, until they have no other choice but to painfully evoke the power of unity from the depths of nature with all their might. And only then, peace will come to Israel and spread to the rest of the world.

However, a far more ideal scenario would be to awaken unity in advance, easily and pleasantly, by initiating an educational program that raises awareness of the unique role of the Jewish people and trains them to fulfill it.
Therefore, it would be a good idea for Trump to invest the $200 million he slashed off Palestinian aid in implementing an educational process that would drive Israel to activate the peace plan inherent in nature. This would be Trump’s best shot at going down in history as the person who brought peace to the region. 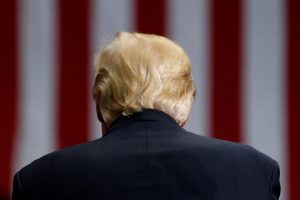 The Times Of Israel: “Today’s Challenges To Jews And The Lack Of Leadership”
Podcast Powered by podPress (v8.8)