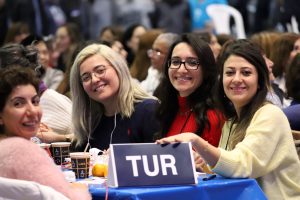 The events described in the Purim story hint at humanity’s spiritual corrections. Translating these corrections from the poetic and colorful language of legend to the language of qualitative inner change lets us see how they describe connection among people, and how we can strengthen such connection. We can then find ourselves, our inner states, our attitudes to each other, and our various relationships as the characters and situations taking place in the Purim story.

International Women’s Day, which falls on Purim this year, draws our attention to two women in the Purim story: Esther and Zeresh, the symbolic representations of two forces at work in the world, which are in fact one.

Every woman has a Queen Esther (wife of King Ahasuerus) side: the quality of righteousness, which justifies the actions of nature and its laws, the laws of love. Every woman also has another Zeresh (wife of the wicked Haman the Agagite) side: a threatening quality, which condemns the power of nature and denies its laws.

How can we discover the attribute called “Esther” within us?

We first need to traverse the attribute of Zeresh, a mind state that focuses our thoughts on how to squeeze the most out of the world: to buy and sell, to receive and control. It is this feminine quality that prods men to strive for power and honor. Without the claims and demands of such a quality, men would be satisfied with much less, fulfilling their basic needs.

According to the wisdom of Kabbalah, Zeresh is also known as “the corrupted Malchut,” the egoistic desire to enjoy for self-benefit alone, prior to being corrected with an opposite intention to love and bestow. She wants to be above others and to erase them, having no concern for any meagerness and mediocrity that she influences upon them.

Women are mostly unaware of the desires that Zeresh represents, because the surfacing of those desires can bring about much anguish. Can a woman fulfill the aspirations to be more beautiful, talented and successful than other women? By nature, such egoistic desires can never be completely fulfilled, as there will always be someone more beautiful, talented and successful. Why, then, would any woman want to hurt herself for no apparent reason? Therefore, such desires mostly lurk repressed within, beyond the reach of conscious awareness.

This is the way of Zeresh, one that lacks self-awareness. Moreover, such a woman can feel righteous, that she wants only good for everyone, while in fact, her attributes are the polar opposite of goodness.

The attributes of goodness are represented by Esther.

Discovering the loathsome inner urges to be better than others illuminates the spiritually elevated form of sincere concern and love for others, Esther’s qualities. When women reach the high spiritual level that Esther represents, they rise above the competitive games and materialistic trappings of the ego.

Esther is concealed and humble. She acts behind the scenes, moving the world with transparent threads of love for others, not self-love and never for herself. She runs the world by exemplifying how to live by loving others. Esther represents the desire to enjoy created by the Creator, but includes the quality of love and bestowal, the desire to give. Esther uses all of her power and skill to lead society to unification, peace and love.

The Purim holiday and International Women’s Day show us the paramount role of women for the betterment of the world. Both feminine forces, Zeresh — the driving progressive force — and Esther, its corrected state — the force of compassion, love and care — are indispensable to bring about unification, peace, love and balance among humanity.

It is possible to reach a balanced state in humanity when female qualities and male qualities complement one another. Therefore, instead of focusing on how men or women can independently rise, we need to learn how to rise together.

It is no coincidence that the drive to find new balance between the genders has become so prominent in our time. Humans are evolving toward a higher experience of life, and for this reason, we have a yearning for a greater sense of wholeness. Lasting harmony, however, can only emerge when opposite forces complement each other.
[261301]

The Wisdom Of King Solomon: “Do Not Grab A Dog By The Ears”

Above Love And Hatred Is The Meeting Place With The Creator
Podcast Powered by podPress (v8.8)