What Do People Expect from Jews?

Throughout history, Jews have had disproportionate success in the economy, politics and culture. However, the more they succeed, the more anti-Semitism rises. It is because there is a subconscious expectation upon Jews to provide something significant that the Jewish people seemingly owe to the world.

What is this subconscious expectation upon the Jewish people?

The Jews have an innate ability, which they themselves are unaware of, to provide each person with perfection, harmony and happiness. It is done via a method of human correction and development according to the fundamental laws of nature: a strategy that teaches us how to overcome a human striving for self-fulfillment at the expense of others by positively connecting us above our primal rejection to each other.

Jews received this method from Abraham in ancient Babylon. It became lost in the exiles. Therefore, today, when we see the world suffering, Jews have to reestablish this method among themselves, testing it as if in a laboratory, and then sharing it with the public.

How can the Jewish people realize the opportunity that will both give them a tremendous profit and become an indispensable value for the entire world?

Kabbalists explain this process and the method for connection on one side, and on the other side, there is amounting pressure on Jews from the nations of the world via rising anti-Semitic sentiment, crimes and threats. Sooner or later, the Jewish people will have to develop their innate ability to connect above differences, enabling humanity with this special ability. The only question is when they will realize it, and what sufferings and blows will the rising anti-Semitism lead to? When we learn how we can mutually complement each other, by doing so, we will see our positive future. 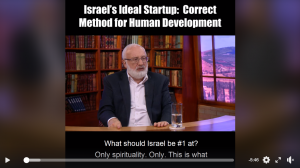 What Is The Ego?