Richard Slavin, an American Jew who was born in the suburbs of Chicago, traveled in his youth for a short vacation in Europe and ended his journey in the Himalayas. From a young seeker, he became a hermit in an ashram, an urban American became a famous guru leading a large devotional community, Richard Slavin became Radhanth Swami.

I was happy to meet him and discover that we are almost the same age, we both come from families who fled the former Soviet Union because of anti-Semitic persecution, and we both reached our destination in the early 1970s: he to India and I to Israel.

I innocently asked him what the Hindu religion was, and he replied that “there are many interpretations, and if you translate from the ancient Indian Sanskrit language, it is a belief in one God, one higher truth, the Father and Mother of all beings and creatures. Although there are many powerful entities, many expressions of the same higher force, in the end we worship a single force,” he said.

“The ultimate goal of life is to live in harmony with this law of nature, this Godly law, and love it,” Swami shares with me the wisdom of devotion, which he teaches to the masses. “When we love God we are like watering the root of the tree, and when we water the tree, the water spreads to all parts of the tree: to the branches, to the flowers, to the fruits. When we awaken love within us, compassion spreads in all created beings.”

I agreed with his ideas, as this is what the wisdom of Kabbalah teaches us: that there is one, unique and unified force, a good and benevolent force and there is none else besides him. This is the approach I teach hundreds of thousands of my students every day around the world. Therefore, I agreed with him even more when he talked about the ego as the main reason preventing a person from discovering the single force.

“Our brain is like a mirror,” says Radhanth Swami; “When you look at the mirror you want to see yourself, but if the mirror is covered in dust and dirt then only they appear to us. The dust and dirt are our selfishness—the self-love, anger, jealousy, greed and arrogance that lead to mistrust between people, dishonesty, cruelty. And when we all want to be in control and enjoy ourselves, we are in conflict. Therefore, only when we realize that the Creator is in control, and that the real pleasure comes from service and giving to the Creator, to the ‘Creator’s children,’ only then can there be peace.”

The essential question I had for the guru was how to attain the single, upper force? How do you rise above the ego? And here, although Swami and I speak the same words and seem to agree on the same principles, our path is different, as is the level of spiritual attainment. Swami sees meditation, yoga, and the use of mantras as a way of purification. He sees various moral practices as a way of life for serving others, a way to clear the mirror in one’s mind.

The purification of the ego—as was common among the Kabbalists thousands of years ago, and expressed in Masechet Avot (6, 4): “Bread with salt you shall eat, water in small measure you shall drink, and upon the ground you shall sleep; live a life of deprivation…”—no longer works in our thick, coarse generation. Therefore, some three thousand years ago, the sages made spiritual corrections and determined that the ego should not be eradicated, but transcended. How? With the help of the “light that reforms”—the positive force that exists in nature and emerges when there is a desire for mutual connection, as taught by the wisdom of Kabbalah.

The meeting was purely friendly and symbolic, so there was no attempt to deeply scrutinize and compare our methods. Swami is a close soul and I felt how the Jew in him speaks through his throat. He is an interesting, eloquent, and simple man with a rolling laugh.

I thank you Swami for the warm welcome, the respect you demonstrated to us, and for escorting us through the city streets, an act that we later discovered you don’t typically do and have never done in the past, but that is what happens when, for a moment, we feel like family. 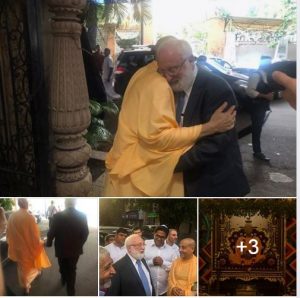 India Under The Fog