“Eva Could Be Me” (The Times Of Israel) 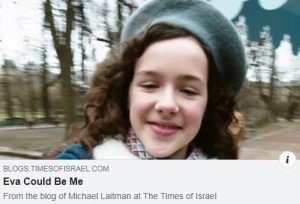 Germany 2019: “More than 12,000 neo-Nazis are active and prepared to use violence,” reads a recent German official report. It’s chilling to realize that this document sounds like it came from the early 1930s when a tiny Jewish girl took her first breaths in Budapest, Hungary. At age 13 during the spring of 1944, young Eva Heiman kept a personal diary like many teens now do on social media. Until three months later, she was taken from her home to her death in Auschwitz. 75 years have passed since then, and “Eva Stories,” a brilliant project on Instagram, traces her life and provides a “modern” glimpse at the dark days of the Holocaust. Tragically, those gloomy days have returned with the rise of anti-Semitism in America and the world, and these are signs, as our sages foresaw it, for us to unite as the one and only deliverance of the Jewish people.

While our cultural world has shrunk to a smartphone screen, our inner world has to expand. Although some would push the Holocaust to the margins of historical memory, we must instead strive to investigate our past and our future. We should demand answers in order to gain insights and shed new light on our reality.

If Eva was actually alive now, she would wonder, ”How could it be possible that anti-Semitism raises its ugly head in 2019 in every corner of the globe and in every language after all that happened? How is it possible that Jews are still the most persecuted people in the world? How does that burning hatred erupt in Hungarians and Germans, as well as Americans and Russians? How can it be that the brilliant Jewish mind—the one capable of flying a spaceship to the moon, of creating an artificial heart, of winning Nobel prizes and Oscars and building social media platforms—has not managed to defeat the hatred toward us over thousands of years?”

In spite of her graceful manners and her innocent smile, Eva must have been experienced enough to say, “No, the hatred toward us does not stem from jealousy. People do not hate us because we are the smartest, the most successful and inventive, and not because they think we control the media, banks and commerce.”

Eva would ponder the deeper reason for the incomprehensible hatred: “Could it be that maybe anti-Semitism is a law of nature, a phenomenon impossible to erase? Are blows from nature begging us to stop and ask a deeper question?”

Certainly, after all she experienced, she would want to listen to what the haters have to say, “Jews are to blame for all human evil. They only take care of themselves.”

She would also return to our sources to learn from our sages and she would discover that, indeed, there is a close, internal connection between Israel and the nations of the world. She would rush to find out exactly what that means: that Jews are obligated by nature to pave the way for unity over all differences. Attainment of human unity is the only solution to all the evils of the world, including anti-Semitism.

Eva’s story might just become our own if we do not bear active witness to how and why bigotry and hatred unfolds worldwide. Eva’s story should underscore the stark dangers of anti-Semitism and how its magnitude and intensity can rapidly evolve and spread. The hatred persists and strengthens day by day. When we are united and become exemplars of loving brotherhood will we be able to enlighten the world toward unity and eliminate all the threats against us. Maybe then Eva would finally post on Instagram the words she wished could have been written in her time: “In Israel lies the secret of the unity of the world.”
[246025]

Collect All The Sparks Of Love

Matza: In Order To Escape
Podcast Powered by podPress (v8.8)