Less than 48 hours after we heard about the terrible massacre in the remote and peaceful New Zealand, we were struck by yet another terrorist attack near an Israeli settlement.

In New Zealand, solidarity is on the rise, and promises are being made to change gun laws. In Israel, the demand to uproot the terrorist infrastructure is resurfacing, and some are exploiting the attack to serve political agendas.

However, no leader, whether in Israel or in New Zealand, is pointing to the root cause that continues to generate terrorist attacks. No public discourse on social media touches on the deeper culprit: the growing human ego, which we must contain.

Until we turn our attention to our growing egoistic nature, it will continue to generate conflicts and lead us to an extremely bloody reality. Ultimately, the human ego will drive us to violence between sectors, parties and entire countries.

In our time, a third world war could be ignited overnight. Our world is increasingly connected through a complex web of interdependence that cannot be unraveled. As human society becomes more globally integrated, binding together countries, economies and cultures, we begin to discover the reciprocity between all parts and aspects of humanity as an inescapable law of nature.

As long as we do not restrain the human ego – in Israel, New Zealand, and any other country in between – human society will go further and further out of balance. Ultimately, the suffering will force us to pay attention to the law of reciprocity that governs us. It’s not a punishment, it is a natural response that stems from the laws of nature.

From day to day, the world will inevitably realize that connecting humans above the separating ego is the only solution and the only way forward.

But there’s more. Subconsciously, an inexplicable demand is brewing in humanity towards those holding the key to the system for uniting humanity: the Jewish people.

The sages wrote that “no calamity comes into the world, but for Israel” (Yevamot 58). Kabbalist Rav Kook wrote that “any global noise happens mainly for Israel” (“Letters of Rav Kook”). And the book of Zohar writes in black and white: “poverty and sword and robbery and killing and destruction throughout the world are dependent on the Jews.” (Tikkun 30).

Today, both the Jewish people and the nations of the world are completely unaware of the dynamic between them. Therefore, to be realistic, the first stage is only to raise awareness of the necessity to follow the law of global reciprocity. This means knowing the foundations of the world as they are clarified in Kabbalah: the structure of nature’s global system, the power of egoism that rules rules over us and throws us out of balance, and the true meaning of the ideal we must strive towards: love your neighbor as yourself. 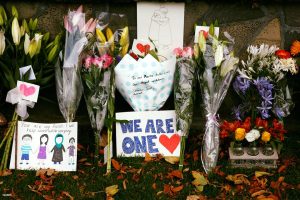 Everything Is Only From Him