My article in Medium: “Canadian Prime Minister Trudeau’s Apology to German Jews Comes at Height of Anti-Semitism in U.S. and Canada” 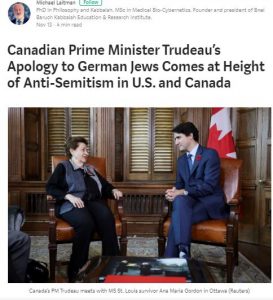 Canada’s PM Trudeau meets with MS St. Louis survivor Ana Maria Gordon in Ottawa (Reuters)
Trying to escape the atrocities of Nazi Germany, around 900 Jewish refugees aboard the St. Louis ship were denied entry to Canada on June 7, 1939. It was one of the many rejected requests to obtain asylum in the North American continent, before the liner returned those on board to safe harbor in four European countries. Unfortunately, 254 of its passengers later perished in the Holocaust.

It was precisely the prosecution they were running away from, prompted by a series of events in Germany that put the lives of Jews in peril: the rise of Adolf Hitler and the Third Reich, discriminatory laws targeting Jewish citizens, the Nuremberg Laws and the Kristallnacht riots by the Nazis in 1938. During the pogroms in Germany and Austria, more than 90 Jews were killed, hundreds of synagogues were torched, and roughly 30,000 Jewish men were arrested and sent to death camps.

The St. Louis set sail on May 13, 1939 when the luxury liner departed Hamburg, Germany and arrived to Cuba as a stopover to the United States. But the Cuban government did not let the passengers disembark and kept the ship in port for days. The authorities refused to accept the foreign refugees despite the fact that they held legal visas previously acquired. Increased anti-Semitism and recent changes to immigration regulations in Cuba restricted their entry.

After the refusal, the boat sailed to the Florida coastline looking for American asylum, but President Franklin D. Roosevelt denied the appeal. The government argued that the refugees aboard the ship had to wait their turn as anybody else in a long line of asylum seekers. After the rejection, St. Louis started returning to Europe.

Aware of the humanitarian emergency, a group of Canadians unsuccessfully tried to convince their government to provide sanctuary for the refugees. The official response was that “no country could open its doors wide enough to take in the hundreds of thousands of Jewish people who want to leave Europe.”

The ship then continued on its course for the Old Continent and docked in Belgium, and from there the passengers were dispersed to France, the Netherlands, and the United Kingdom. But during WWII, many of them fell under Nazi control, putting the refugees back in harm’s way. Many survived, but hundreds were sent to concentration camps and died.

“We apologize to the 907 German Jews aboard the MS. St. Louis, as well as their families,” Canadian Prime Minister Justin Trudeau said recently in the House of Commons. “We used our laws to mask our anti-Semitism, our antipathy and our resentment.” He added, “We are sorry for the callousness of Canada’s response. And we are sorry for not apologizing sooner.”

Trudeau’s mea culpa comes at the time when anti-Semitism is globally on the rise, with Canada and the United States being no exception. The deadly attack to the Tree of Life synagogue in Pittsburg was not an isolated incident in the US. Anti-Semitism on campuses, on the Internet, continuous physical, unprovoked attacks in cities like New York, vandalism to synagogues and private homes are only some of the manifestations of the increasingly rampant hatred in America toward Jews.

With the establishment of the State of Israel, the Jewish people can feel that there is a safe haven. Indeed, on the verge of an unbearable crisis, no country, not even the US or Canada, will be unconditional to us, defend our interests, and protect us from anti-Semitic existential threats. The waves of modern anti-Semitism that now plague the Jews in Europe should serve as a reminder of our mission: to unite. That is our only life insurance.

We have no one to rely on but ourselves. Everything depends on us. The Jews are responsible for everything that happens in the world, whether for good or bad. As it is written, “There is no calamity that comes into the world but for Israel” (Tractate Yevamot 62a).

In the meantime, we do not feel that way, but the wisdom of Kabbalah explains that is how the human communication system is built from within. The Book of Zohar compares the connection between Israel and the world to the organs of the human body: “Israel among the other nations, like a heart among the organs, and as the organs of the body could not exist in the world even one moment without the heart, so all the nations cannot exist in the world without Israel.” All the accusations, every persecution, every rejection, every rage and threat expresses the world’s demand that the Jewish people, wherever they are, should fulfill its role and lead humanity to happiness and a meaningful life.

Unconsciously, humanity feels that the Jews have the solution to all its problems and the key to its happiness. Global pressure on Israel is guided by the program of human development defined in nature, as Rav Kook wrote in the early 1900s: “In Israel is the secret to the unity of the world.” If so, sooner rather than later the Jewish nation must fulfill its role toward humanity and be a “light unto the nations” — to serve as a good example of a civilized society in which everyone lives in mutual solidarity and brotherly love above all differences. Only then will we sail to a new and good world. As our sages said, “If I am not for me, who is for me; and if I am (only) for myself, what am I. And if not now, when?” — Hillel, Ethics of the Fathers, 1:14

The Reward Of Perceiving Yourself As A Sinner