If we can treat each other like a mother treats her child, with love from the bottom of our hearts, feel that we are much closer than brothers and sisters, connected with each other spiritually, then we’ll feel our true state.

If one see the friends as above him in understanding or action, nature obligates him to rise higher than his inherent nature. Thus, with no great aspirations, by nature one gains new forces by envy.
Thus there are inherited qualities and those acquired by envy in the group.
From Twitter, 10/8/18

The tragic killing in the Barkan industrial zone, where Kim Levengrond Yehezkel and Ziv Hajbi were murdered, has left us with nothing except to embrace our grief. To embrace the lost children, the broken parents, the suffering siblings.

Along with the sorrow and pain, a dream has vanished. The bubble of coexistence between Jews and Arabs was shattered, and the illusion of life based on mutual respect and cooperation blew up in our faces. But was there ever coexistence between us to begin with?

True coexistence will occur only when the people of Israel are united. The Jewish people was created when Abraham gathered representatives from the various tribes and clans who lived in ancient Babylon, some 4,000 years ago. They were all strangers and very different from each other, but they preferred to maintain unity over the division.

Their efforts to connect with each other above all differences evoked a positive, powerful and connecting force from nature itself. It is only the discovery of this natural force that allowed the people of Israel to live in unity and coexistence. As Rav Kook writes: “the secret for the unity of the world lies within Israel.”

However, the unity was shattered and the people of Israel parted and dispersed throughout the world for two thousand years. Only when we reawaken the connecting force that lies between us will we rise above our egoistic nature and be able to live in coexistence – within our country, with our neighbors and with all the nations of the world.

Before we correct the human ego, we can sum up the talk of living in peace and coexistence as a naive aspiration and nothing more. Coexistence and connection between human beings requires the capacity to rise above the growing ego, not any temporary cooperation.

Human egoism will only grow and continue to complicate our lives. It is the natural course of human development. If we do not balance the ego, it will lead us to a bitter future. The horrific murder in Barkan is another eruption of the human ego, and unfortunately, will not be the last case.

The Barkan industrial zone will no longer be marketed as a symbol of peace in the chaos of the Samaria region. But if the people of Israel set the example of unity, Israel will become a symbol of peace within the chaos of the world. Then, we will not only live in coexistence, but in global coexistence. We will feel ourselves as one united people, and we will shine like a lighthouse to the world, fulfilling our duty to become a “light unto the nations.” 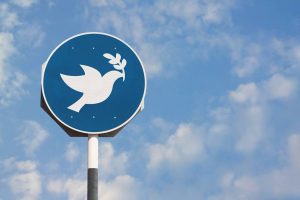 Do Not Be Afraid Of Desires

Question: What desires interfere with the spiritual path? Do I have to fight with them; what should I do with them?

Answer: Do not be afraid of any desires and do not try to rebel against them. There is no need to fight with them. This is all quixotic. The only thing you should do is draw the upper Light: it created these desires and it is intended to correct, direct, and use them.

We neither reduce nor increase desires. We do not pressure ourselves. We do not develop the property of bestowal, love, and unity on purpose, as it is not our competence. We only have to draw the upper Light so that it does the work.
It is a big mistake to think that we can change ourselves by ourselves. We only confuse ourselves this way.
[233860]
From the Kabbalah Lesson in Russian 5/13/18

A Sefira is a desire to receive pleasure that restricts itself and opens up to bestow to a friend, that is, it already has a screen and reflected Light, a calculation for bestowal. To the extent that it bestows to a friend, it is considered radiant, and therefore, it is called a Sefira. The desire is divided into ten Sefirot that want to shine, to bestow to each other, and thus to unite in order to bestow to the Creator. To this extent, the Creator shines on them. Then, they begin to glow and are called ten Sefirot.

We can work with these ten Sefirot on many levels provided that we are able to rise above our desire and turn it into radiance, a source of Light.

Obviously, I cannot be the source of Light, but to the extent that I want to bestow, the Light begins to appear in me and grants me the force of bestowal. Thus, I become the channel for conducting the upper Light to others. Everyone has to become such a channel, connecting the Creator with others. This is how we will rebuild the broken system of Adam HaRishon—one common soul of humanity.

We belong to the last generation, which has an enormous desire to receive pleasure and which is very difficult to correct. Therefore, we resist this correction a lot, and stretch out the time.

On the other hand, this is such a difficult and long process because we are performing a collective correction. A long time ago, a single person or a small group was enough to get closer to the Creator, reveal the upper force, and achieve their correction because they were correcting themselves. Today, however, we are at the beginning of the process of the collective correction, and therefore we have to build a transition adapter out of ourselves for humanity as a whole, for all the souls.

That is why our correction is so vast and broad, unlike any other in history. It is why we have to exert such great efforts for even the very first entrance into the spiritual world.

Accelerating spiritual development is only possible through our connection. Also, it is important to know why we need this connection, as it is written: “the end of an act is in the preliminary thought.” We are living in the era of the end of correction (Gmar Tikkun). Therefore, we must make a move toward this desired state, and from it begin to spin the wheel backward and see what we need to do now. However, we must aim at the end goal from the very beginning. The widest circle at the end of correction and the closest one, with the ten inside of it, which is no longer a circle but a line, it all has to be included in one single aim.1
From the 1st part of the Daily Kabbalah Lesson 9/27/18, Lesson on the Topic “Sukkot“
1 Minute 35:22

Related Material:
Ten Sefirot And Not Less
Why Is The Soul Made Of Ten Sefirot?
Letters And Sefirot

Sukkot Is A Symbol Of Internal Work

The holiday of Sukkot symbolises a cover, an anti-egoistic screen under which the desire to receive pleasure is hidden—a whole person. Sukkot is a symbol of internal work in a corrected way: the desire to receive pleasure under the restriction and the screen. A person makes sure that the shadow is greater than the light of the sun, sitting in the Sukkah for seven days according to the seven Sefirot: Hesed, Gevurah, Tiferet, Netzach, Hod, Yesod.

Until one corrects them all and comes to the holiday of Simchat Torah (the Joy of the Torah), that is, until one pleases the Creator by correcting his desire to receive pleasure at this stage and moves closer to the end of correction.1
From the Daily Kabbalah Lesson 9/27/18, Lesson Preparation
1 Minute 12:20

Preparation for the Convention