We are thrilled to have a huge delegation from China joining us at the World Kabbalah Convention. 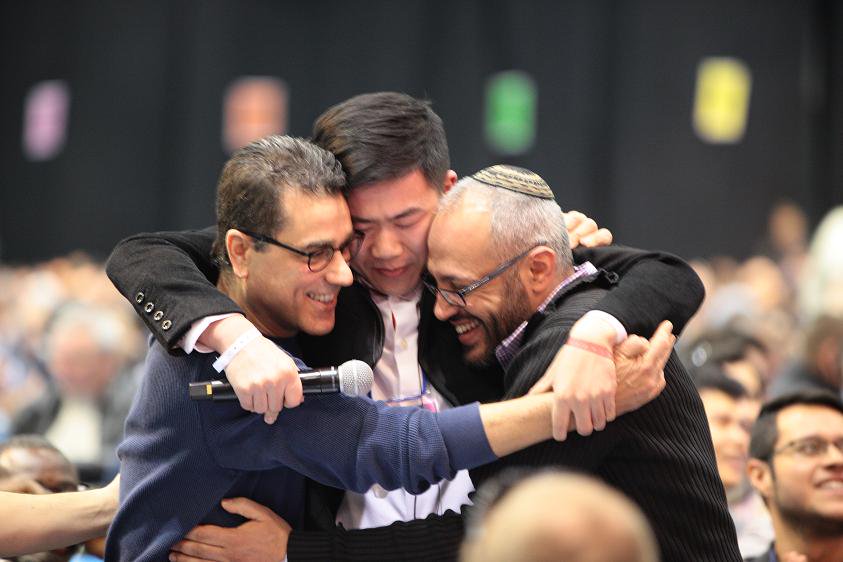 In the News (Times of Israel): “Israel is throwing away approximately 35 percent of the food it produces, to the value of an estimated NIS 18 billion in 2015, according to a report released this week by Leket Israel, the National Food Bank.

“The food waste in Israel has far-reaching implications, especially for the 17% of Israeli society considered ‘food insecure’ — those who are not sure that they will have enough food over the course of the month.

“‘There are things that we can do with very minimal effort to rescue food, but we need to have policies that will direct this, policies that come from a government level,’ said Gidi Kroch, the CEO of Leket Israel.”

My Comment: I think that it is much more than that. But even this would be enough to feed all of those in need.

Comment: Many steps are being taken to avoid throwing food away.

My Comment: Nothing will help with this or automobile accident fatalities, problems in schools, the family, and every possible place. Only the ascent of a person to the next level of development will help solve all problems.

People throw food away because what happens to others doesn’t matter to them. If you knew that your children living a few kilometers away from you were now starving, wouldn’t you bring them food?

We lack a sense that we are one family. So, it is necessary to revive this feeling between us. Then there will be plenty of everything for everyone. Otherwise, it will not be possible to solve this problem.

I am not saying that it is necessary to run and distribute food. But anyone would willingly set aside all his surpluses. So this is not even about sharing with someone, but simply about giving them the surplus we are throwing away.

Then all would be well and rational related to food. We cannot imagine the quantity of food that is thrown away in stores, supermarkets, wedding halls, and restaurants. We throw away more than we eat.

What this means is that we must organize special distribution systems. Then people will not starve and there will always be enough for everyone.

If we felt that those who are hungry were our relatives, this would push us to set our surplus aside and create a system for collecting and distributing it. The same could be done with clothing and everything else, meaning the immense surpluses of products we have manufactured.

It is possible to achieve such a feeling only when we begin to implement the great general rule, “And you shall love your friend as yourself” (Leviticus 19:18), or at least when we feel that we are one people.

But we can achieve this only with the help of serious re-education and in no other way. It is impossible to solve problems like these differently. We must speak and write about this so much that everyone will understand how they are living and who they are. Then it will be easier to explain to people that we need to do something about ourselves.
[200505]
From KabTV’s “News with Michael Laitman” 1/11/16

Related Material:
Should They Starve?
The Curse Of Useless Abundance
The Future Supermarket

From “The Crisis and its Solution,” Arosa Forum 2006

If we explore the principle of altruism in nature, we discover it is the basis of all life. Every living organism is composed of a plurality of cells and organs that work together, complementing each other. In this process, they are obliged to concede, influence, and help one another. The law of integration of cells and organs according to the altruistic principle “one for all” is effective in every living organism.

The law of evolutionary development forced elementary particles to connect into atoms, molecules, and then into living organic cells that are able to reproduce by themselves according to an intracellular program. Living cells have the desire to reproduce and create more complex organisms, and all this happens due to connection.

Connections become more extraordinary. Inside living bodies such processes happen with which human wouldn’t agree. For example, a cell is ready to die in order to make room for new cells, or serve as food for other cells, and so on. That is, in the process of development, the altruistic actions are performed on the part of nature when one takes care of the entire environment in general.

For example, cells of the human body exist in one system and are fully subordinate to it. It’s not because it has power over them, but because each small cell, according to its internal program, seeks to join the system. For them the law of the system, of the general connection, is the utmost and most important asset.

They themselves are willing to live or die—it is not important to them. The feeling of the law of the system in which they exist is higher for them than their own material existence. A cell kills itself in order to make way for a new life, and through this it gets connected to the general process or general program.

In terms of the general program, this cell doesn’t die, but precisely continues to live due to the fact that it provided the place for the new living cells.

It allegedly doesn’t conform to the fact that all of nature is based on egoism. The connection always involves concessions and annulment, and the more complex the living compound, the more annulment it requires.

When non-living plant and animal cells connect, concessions are not the result of a primitive egoistic calculation, but a desire to win at a level higher than the one visible to us. A cell, by annulling itself, gives life to more complex cells that appear in its place and through them gets a new existence on the higher level.

This way non-living material is transformed into a plant, a plant into an animal, and an animal into human. At each stage, the matter becomes more complex, and this high organization is only possible due to annulment for the sake of connection. This way connections become more qualitative. They have no egoistic calculations of the previous existence but only care about the higher connection.

Fish go to spawn and die for the sake of future offspring. Biologists think that this is blind instinct, but nature does not kill just like that. Due to the death of the lower level, the life on the higher level is born.

Through self-sacrifice at the previous stage, a more complex and advanced combination appears to such an extent that even conventional non-living materials become radioactive and emit particles. Any chemical compound, even the simple atoms of hydrogen and oxygen, is based on mutual concessions where each one sacrifices its independence in order to connect.

If the material then decomposes, it means that it is more stable in this form rather than in a connected one. This is the essence of all chemical reactions and processes. A more complex compound is a more valuable gain. This is the process of development that raises the nature to a more highly organized level, each time requiring more significant sacrifice.

Therefore, altruism is the principle of life, because without it, connection at the level of elementary particles, or atoms, or molecules, or any organisms would be impossible. There would be no complex living beings and only due to the complex organization do we have feelings and intelligence.

All highly organized forms of life that require the ability to match and compare one with another are based on annulment and connection as well as on the self-sacrifice for the sake of a higher state.
[200441]
From the 3rd part of the Daily Kabbalah Lesson 1/11/17, Lesson on the Topic, “Mismah Arisa,” (Arosa Document)

New Life #397 – Community Building In The Era Of The “I”
Dr. Michael Laitman in conversation with Oren Levi and Tal Mandelbaum ben Moshe

How to we get to know the self through community education and how do we learn to manage our lives in the best possible way through our relations with the environment?

Everyone is an individualist, but today we are all connected. We need to develop community education. Community life can certainly save us a lot, but no one wants to get close to others.

The goal of community education is to develop the ability to connect to others, the ability we had as children. An educational group is not a community yet. A community refers to the connection between people.

If everyone comes out of his corner, we can turn any simple neighborhood into a prestigious neighborhood.
From KabTV’s “New Life #397 –Community Building In The Era Of The “I” 6/5/14