Torah, Deuteronomy 18:16 – 18:18: According to all that you asked of the Lord, your God, in Horeb, on the day of the assembly, saying, “Let me not continue to hear the voice of the Lord, my God, and let me no longer see this great fire, so that I will not die.” And the Lord said to me, “They have done well in what they have spoken. I will set up a prophet for them from among their brothers like you, and I will put My words into his mouth, and he will speak to them all that I command him.”

The highest corrected quality in a person from the right side is “Prophet,” from the left side, “King,” and at the bottom, “the people.” Therefore, the people, meaning those qualities of a person that still are in the process of correction, can’t be connected with the Creator at the level of Prophet.

Desires of the people can’t value Prophet and King. This is very serious subordination.

It is written, “Let me not continue to hear the voice of the Lord, my God, and let me no longer see this great fire, so that I will not die.” This means that a person should have fear in order not to go beyond the level where he can’t resist.

For example, if today I haven’t eaten anything, I am still able to hold back and not to take anything from the table. However, if I were hungry for several days, then I’ll grab anything like a hungry beast, not paying any attention to anybody.

Therefore, “so that I will not die” means not to receive for myself, because exactly this means spiritual death.
[200842]
From KabTV’s “Secrets of the Eternal Book” 9/05/16

Related Material:
Life Means Getting Closer To Love
What Is Our Life? A Game!
When Spirituality Becomes Our Life

Equal partisan forces don’t generate public consensus. Rather, they should set a common goal and move towards it together.

Before taking action, we need to study the laws by which society develops. But we’re like children – we act first…

People think they’re not subject to the laws of nature and can establish their own laws for social development. That’s just silly!

The poor get higher salaries, yet their numbers rise. This is because society develops only to reveal its universal egoism.

Nature is always balanced. Thus, the fierce opposition to Trump shows that his new approach to society is generally right.
[#201484]
From Twitter, 2/3/17

Can Letters Program Our Fate?

Question: Can letters or combinations of letters program our destiny and life and carry strength?

Answer: The letters themselves cannot do anything. Writing letters on paper has no effect on anything. Any so-called “holy letters” that people kiss, put under their pillows or on their foreheads, or meditate with have only a psychological effect of a person supporting himself with his own intention.

Related Material:
“Health To All Their Flesh….”
Cameos Are A Lie!
The Creator’s Typewriter

Question: What is the special force of attraction in the tribe?

Answer: A tribe is a womb, a mother, and a place where I can feel confident and secure. We are constituted by nature so that when we are among relatives we don’t worry about anything. Even if there is nothing to eat and the future is unknown, even if there is a war, I am inside the general force of nature that protects me.

This is also a psychological protection anyone understands. It is felt even if we come from a big city to a small town. Apart from this, the sense of security comes not from people, but from nature in general. Nature is like a big mother, and I am inside a little mother—my tribe.

Family is the smallest tribe. A person comes home into a warm family atmosphere and all the troubles and problems of the big world calm down. At least for an evening he can forget about all his problems and enjoy family comfort and companionship. He was stressed, but here he as if lands on a cushion of air, on a warm, calm, soft cloud.

This feeling is necessary for a person, especially for a man. A woman, because she is closer to nature, can deal with problems more easily than a man. Men are brave and eager to fight, but it is from fear of the problems and insecurity.

The woman in the family, although she can appear worried externally, in fact is the source of strength and calmness. Man receives the feeling of calmness in the family from a woman, and it helps him balance his life and relieve pressure and stress.

The tribe is exactly that shell, that frame, that is specifically designed for a person to live inside of and not to come out. The exit from the single tribe and division into many nations happened in ancient Babylon when great egoism erupted in people and they could no longer understand each other. Then they began to disperse throughout the globe, increasing the distance from each other because they began to quarrel.

If at that time they could have overcome their increased egoism, they would have retained their tribal ties on a higher level, above the increasingly growing egoism. Then they would have discovered the inner force within themselves, the positive force of nature that balances the negative force of egoism.

This is the secret of the mother’s womb; there is a positive force that we have yet to discover. If people followed the advice of Abraham in ancient Babylon, they would have discovered the upper force, the positive force of nature.

But since they followed their egoism, they dispersed from Babylon in all directions and until today each nation feels itself completely separated. Even among the people who initially lived as a single tribe, no unity remains.

The more egoism grew, the more a person instinctively moved away from others so our egoistic interests wouldn’t face each other. This is how the the modern world was created.

However, in the last 30 to 40 years, the world became global and integral like a small village and our egos our pushed together again. So what have we achieved over 3.500 years? We thought we were making our lives better and more comfortable, but it turned out that we returned to what we left and it became even worse.

Instead of few million Babylonians, today there are billions of people on Earth who can’t get along with each other. Our egoism won’t allow us to live in peace. It turns out that we will have to follow the advice Abraham gave in ancient Babylon and build the tribe between us that has to exist even if it was destroyed 3,500 years ago.
[199168]
From KabTVs Program “A New Life” #794 11/29/16

Related Material:
Babel—Second Round, Part 1
The New Humanity Is Born In Suffering
The Essential Commodity Of The Jews

Filed under: Ancient Babylon, Egoism, Man and Woman - No Comments → 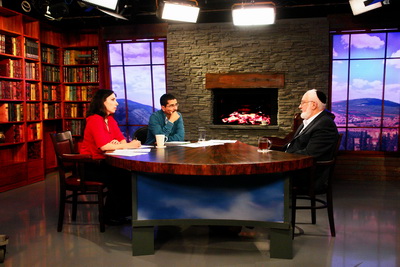 How do different cultures relate to time and managing it; how does life from giving change the perception of time and provide a sensation of eternity?

Life is over at the end, but we try to escape the existential questions that have no answer. If we invest time in the development of the human spirit in us, we can break through the limitations of time and ascend to a new dimension.

I want to get something, but receiving it only works for a time. Giving is effective immediate. It requires a suitable environment that understands that mutual giving contains the concept of another dimension and it wants this.

You need to learn as much as possible about how we rise to a new level and how we learn what true giving is. Then a person doesn’t measure time like now; he measures the force of giving that goes out from him toward others.
From KabTV’s “New Life #356 – Proper Time Management” 4/22/14

Lesson on the Topic: “Mismah Arosa (Arosa Document),” “What Is to Be Done?”