Intricacies of the Hebrew Language

I had a meeting that was recorded with Dan Kaner, the anchorman of radio Kol Israel and a popular Television host in Israel. 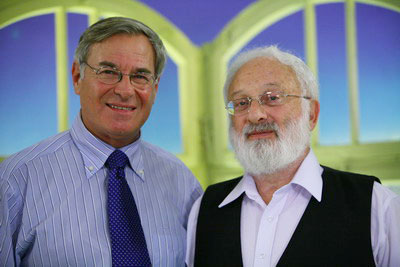 By origin, Hebrew is a symbol for the forces operating in the universe. It harmoniously expresses the essence of man and nature through letters and symbols (TANTA). Combining and ordering the letters to form words and sentences is a means to describe the order of the creature’s creation and correction, all the way until the full correction – similarity to the Creator or Light. The Torah exemplifies this order. Knowing what forces and actions are indicated by the letters enables one to move all along the process of creation, to become incorporated in it at different stages, and to thereby gain a better understanding of the Creator’s plan.

Dan was very impressed with the wealth that the language of Kabbalah offers in describing the Hebrew language, the sensations that every letter evokes when interpreted Kabbalistically, and the music of feelings that plays in the combination of letters. He understood that Kabbalah enables one to enter the world of letters, symbols, forces and desires – to feel them and their filling with the Light.

Related Material:
Laitman.com Post: Between the Lines – A Talk About Words and Letters
Baal HaSulam Article: “The Book of Ten Sefirot – Preface”

The Moral Norms of a Kabbalist

There Are No Speeding Tickets In Spirituality
Podcast Powered by podPress (v8.8)