The word BARA is contained within the word BERE-SHEET, which alludes to the fact that everything is created by the concealed Light of Hochma of AA. His action is BARA (created), from the word BAR – brought Bina down, outside, so that its lower part fell to ZA, and through ZA facilitated the correction of Malchut, in which all human souls are incorporated.

Even Judicial Courts, Insurance Companies, and Financial Markets Have an Inkling About the Upper Force

I had a conversation that was recorded for an upcoming TV series on the topic of the Upper Force. I spoke with: 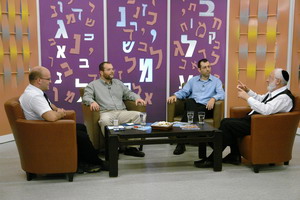 We write off anything we don’t know as the “Upper Force” – some superior force that causes an unexpected turn of events and often excuses us from liability for them. Judicial authorities, insurance companies, and financial markets all view this “intrusion” of the Upper Force into our lives differently and interpret it in their own way.

Why Do We Like the Idea of the End of the World?

A question I received: Why is “the end of the world” such a popular topic today?

My Answer: You’re right. Instead of attaining immortality, people are building the Arctic Doomsday Seed Vault on Spitsbergen to store seeds of all the plant species, so they could restore the planet’s vegetation after a global war or a natural catastrophe. They are also thinking of storing a sperm bank in outer space, and other such ideas. However, people aren’t doing this because of the romantic notion of the end of the world, but out of the sensation of hopelessness. This sensation is alluring and tempting in a way, and this is why the idea of the end of the world is so popular in movies, books, and computer games.

So the answer to your question is that our egoism attracts us to death, lures us toward a catastrophe, and enjoys watching the tired old world disappear, according to the verse, “Revel and enjoy, since tomorrow we’ll die!” (Nuchal ve Nishte Ki Macharo Namut.) Since “tomorrow” is becoming more and more menacing, we are feeling more and more indifferent and indolent to “today.”

According to Kabbalah, if one isn’t on the path of correction yet, then this is actually the next best attitude to have toward the future, because one reveals hopelessness, the fact that there is no solution in our world, and thoughts that aren’t typical of an ordinary person living on the animate level. Later these thoughts and feelings will develop, because egoism will keep growing and it will demand fulfillment – a solution to these problems.

Video: Why Are So Many People Coming to Kabbalah? [7:30m]: Play Now | Download