The Book of Zohar. Chapter “Who Has Created These, of Eliyahu”

The Book of Zohar. Chapter, “Who Has Created These, of Eliyahu” (abridged)

11. Rabbi Shimon said: “Elazar, my son (the continuation of the present state, the next degree), reveal to us the supernal secret (law), which the people of the world know nothing of (which they cannot observe in their properties).” Rabbi Elazar was silent (unable to reveal this to the lower ones). Rabbi Shimon wept (entered the state of Katnut, descended to a lower degree on the spiritual ladder), was silent and then said: “Elazar, what is THIS? If THIS was the stars and the signs of the zodiac (destinies), they would have been visible the whole time and located in Malchut, i.e. created, as it is said, “by the word of the Creator were the heavens made.” Meaning, by Malchut, called the “Word of the Creator,” were the heavens made. And if THIS refers to the concealed secrets, then it wouldn’t be written THIS, for the stars and the signs of destinies are visible to all (“THIS” indicates that the object is understood).

12. But this secret was revealed on the day when I was at the seashore (the edge of wisdom). Eliyahu the prophet (the revelation of the degree of wisdom) came and told me: “Rabbi, do you know what WHO HAS CREATED THESE means?” I told him: “These are the heavens and their hosts, the works of the Creator, that man can look at them and bless them, as it is written, ‘When I behold Your heavens, the work of Your hands! Our Master! How glorious Your name is throughout all the earth!’”

13. Eliyahu told me: “The Creator revealed the concealed to the Supernal Assembly: When the ‘concealed of all the concealed’ desired to reveal himself, he first made one single point (Malchut), and this point ascended into his thought (Malchut ascended and joined Bina). With it he drew all the forms and with it engraved all the images.”

14. He engraved inside a concealed, sacred candle (inside Malchut that joined Bina) one concealed image of the holy of holies, a secret structure that has emerged from the thought called WHO, which is the inception of the structure. It is great and is concealed deep inside the name (Bina) ELOKIM = ELOK–IM = THIS-WHO. Initially WHO senses the absence of THIS, strives to the name ELOKIM. He desired to be revealed and be called the full name ELOKIM – hence He clothed Himself in a precious, radiant garment (the Light of Hassadim). He created THIS. The letters THIS of the name ELOK–IM ascended and joined the letters WHO, thereby forming the full name ELOKIM. And until He created THIS, ELOKIM did not ascend (rise) to the name ELOKIM (to the level of Bina). That is why those who sinned in worshipping the golden calf (those who fell from the property of bestowal into the property of receiving for oneself), they pointed their finger at this secret, saying: “THIS is your Lord, Israel!” (they wanted to use only the lower part of Bina, which passes the Light of Hochma to the lower ones, without comparing itself with the properties of the upper part of Bina, the properties of bestowal).

15. Just as WHO joins with THIS to form one name ELOKIM (when Hochma clothes in Hassadim), so does the name join by this beautiful radiant garment. On this secret (the ability to receive for the sake of bestowal) stands the world (the fulfillment of souls), as it is said: “The world was created by mercy.” And Eliyahu flew away (ascended to the degree higher than mine), and I could no longer see him (could not reveal him on my own). But it is from him (from this revelation he made) that I attained the touch of the secret of revelation and of the secret of concealment (how to conceal the uncorrected desires and how to reveal the desires that have been corrected by the Light of Hassadim). Rabbi Elazar and all the disciples drew near (equalized their properties), bowed down (bowed their heads, descended to the same level as the body), wept (lowered their degree) and said (only then did they reveal): “If we had come into this world (attained this degree), but only to hear (attain this property of bestowal, Bina = hearing = ears), it would have been enough for us!” (we desire nothing more than to bestow).

“Who Has Created These, of Eliyahu” – full commentary.

Related Material:
A Guide to the Hidden Wisdom of Kabbalah Ch. 4 – The History of Kabbalah and The Zohar

In Command & Conquer: Red Alert 3, Russia Is Armed With the Invincible Weapon – My Books

Part three of the super-popular game Command & Conquer is about to be released, and Russia’s new top secret weapon has already been discovered.

In the game’s promo clip, the Soviet consultant Varenka is armed with several volumes of my books (see the bottom left corner of the photo). 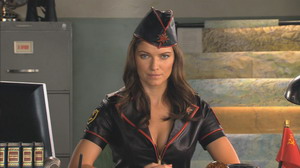 (Taken from LiveJournal, third picture from the top.)

A question I received: More and more people are waking up to the evil within us. Why don’t Kabbalists go out on the political arena? Won’t establishing a political party also be a way to distribute the knowledge of Kabbalah? Or will this hurt the distribution of this wisdom? Even if people don’t like what they hear, they will still have a relation to Kabbalistic knowledge. Wouldn’t the Light give people a push in the right direction then?

My Answer: Our goal is to educate people, to give them knowledge about the true structure of the world, its goal, and man’s role in the world. People will soon start to understand that in order to reach a better future, they have to change their lifestyle, the entire social system and government relations. They will then desire to change their world based on our explanations of the laws operating in society and the world, and will come to naturally realize that the world has to be governed by Kabbalists.

However, this will happen to the extent of people’s Kabbalistic education, the recognition of evil and correction. Until then, we have to disseminate Kabbalah from below upwards, because any attempts to enter politics (to “take over” the Ministry of Education and teach Kabbalah to the masses) will be misunderstood and met with hostility.

Related Material:
Laitman.com Post: Will Bnei Baruch Turn Into a Commercial Enterprise or Political Movement?
Laitman.com Post: The Solution to the Clash of Civilizations
Kabbalah Today Article: “Havoc In Modern-Day Babylon”
Article on Education: “From Generation I to Generation We”
Interview: An Age When Children Are Wiser than Adults – An Age of Crisis

Perception of the World

Perception of the World

With our sense of sight we see a great world before us,

And all its wondrous filling.

But in fact, we do not see all that

Except in our own interior.

There is a sort of a photographic machine in our hindbrain

That portrays everything that appears to us,

And nothing outside of us.

What Does the Torah Say About the Red String?

A question I received: I have discovered that not only do red strings fail to help people, they are also absolutely forbidden by the Torah. It says in the book of Beresheet, the chapter Derech HaAretz: Rabbi Tzadok said: “הקושר על ידו חוט אדום הרי זה מרדכי האמורי” – “One who ties a red string around his hand is like an impure force against Mordechai (the property of Bina).”

Why is it that when you answer questions dealing with myths about Kabbalah, you always mention Tarot cards, red strings, yoga, and so on? Why do you never mention “channeling” which is so popular now? For example everyone knows about Lee Carroll’s numerous appearances at the UN, as well as his books. And there are many other people who practice other teachings that coincide with what you teach. I have no doubt that no one explains the structure of the universe in as much detail as Kabbalah, but still the other methods help “awaken” humanity, which is running late with its correction.

My Answer: I am not familiar with all the “spiritual” teachings, and I don’t plan on getting to know them. They all appear and then disappear. I don’t have the time or the desire to pay attention to them. If we were to systemize everything that our egoistic mind can invent, then we would see how meager it is.

I prefer the teaching of Kabbalah, which deals with practical entrance into the Upper World (I have tested it for myself). It is based on coming out of the nature of our world, instead of all the different religions and teachings of this world (this can also be seen from above, from the Upper World). I advise you to do the same.

Related Material:
Laitman.com Post: There are no Miracles
Laitman.com Post: All the People In the World Are Sick With the Same Illness
Kabbalah Today Article: What is (and is not) Kabbalah?
Chapter from Book The Kabbalah Experience: Beliefs, Mysticism and The Supernatural


Filed under: Torah - No Comments →