CBS46 reporters Tim Lister, Sebastian Shukla, and Fanny Bobille wrote that there is “A new kind of global war as countries battle it out for masks and PPE (personal protective equipment).” “The U.S. diverted 200,000 respirator masks destined for Berlin”; “Spanish Foreign Minister Arancha González Laya said an order for ventilators that had already been paid for had been impounded in Turkey.” Unspecified “American customers … had tried to pay Chinese suppliers three or four times the agreed price to get critical supplies diverted” from France. The Brazilian government has also claimed that US demand is vacuuming up available supplies” and that they tried to purchase PPE but “a lot of them fell through” to American hands.

But countries aren’t only stealing from one another; they are also preventing exports of equipment, thus “testing existing relationships and alliances,” according to the article. For example, the French government seized all masks that are made in France, and Newsmax writes that America threatens to take legal action against China for restricting exports of PPE.

I understand why they are doing this; it’s human nature. At the same time, I understand that this kind of behavior, especially now, will backfire against those countries. UN environment chief, Inger Andersen, told The Guardian, “Nature is sending us a message with the coronavirus pandemic.” I think it’s more than a message; I think it’s a warning shot, a scratch on the skin, but of no real harm to humanity.

We are surrounded by insects, rodents, and wild animals that we have forced to come near us by ruining their habitat, and each of them carries an untold number of viruses and germs that could potentially be far worse than COVID-19. What if, for instance, the Ebola virus that mutated into a more contagious but less aggressive strain and started the 2014 West African Ebola epidemic had mutated into something even more contagious or more violent? This is just one example, but nature is very creative when it comes to plagues.

Those who steal masks are not only harming themselves; they are harming everyone, the whole planet. We must realize that we cannot keep using our egos as if there is no tomorrow. The corona genie is already out of the bottle and demands that we stop. We’d better listen because it can make us pay.

There is no place to hide from it, even for the wealthy, who contemplate riding out the plague in their secluded mansions. If the virus could spread as far as Easter Island and sicken someone who has not been in contact with anyone from outside the island, then the virus can go anywhere.

The only solution to stopping the coronavirus, and any other bug that’s lurking in the entrails of some animal, is to stop the spread of meanness toward each other and toward nature. And we must start with one another and from there advance toward nature, not the other way around. Only once we transition our ill-will toward each other, we will be able to transition it toward everything else: climate, trees, animals, and nature as a whole.

We cannot learn what care means before we care for one another. We cannot be happy unless we create a society whose members are happy to be together. And if we’re not happy, there is no chance we will be kind to nature, to each other, or even to ourselves. 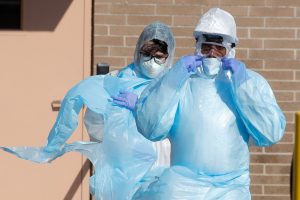