Outbreaks of infection demonstrate to us the principle of connection and responsibility of people, how each person affects all others. Nature will teach us the right interaction until we realize the rules of good interaction of all people. Thus, we will come to a complete correction of egoism!

Since the tendency of nature’s development is toward unity of opposites, in the future those who are able to unite the opposites with their methodology as the necessary mutual completion, according to the rule: “Love will cover all crimes,” will always succeed.

We are purposely causing the blows to our desire to enjoy, otherwise we cannot reveal its lowliness, hollowness, and its wicked hold over us in order to want to break free from it.

The desire to enjoy is within us, ruling over us. We can compare the two states: when we’re free from its reign and when it controls us. The difference between these two states gives us the chance to achieve the cry of despair that we cannot be free of the ego’s authority over us!

Sometimes we aspire to escape the slavery of the ego and enter bestowal. The contrast allows us to appreciate the state of freedom from #Pharaoh’s rule, and we wish to flee from him. If Pharaoh appears to consent to releasing us, the Creator hardens his heart, Pharaoh’s (ego’s) rule is strengthened, and everything repeats…

The state of the world Bnei Baruch group is exclusive because out of all the billions of individual souls, we have been chosen to be in the system of Yashar-El—a group aimed “straight at the Creator” that is pulling all of humanity toward correction.

Our egoism keeps growing, demanding constant economic growth. #Coronavirus forces us to separate, thus accelerating the unfolding of the global economic crisis. Salvation lies in unity. The method of everyone’s unification is #Kabbalah. If the #Jews fail to unite—they are hated by all the nations!
#Antisemitism

In each of the countries polled, a representative sample of 1,000 adults was presented with 45 questions or statements in face-to-face interviews about Jews and Israel. The survey finds 1 in 5 Europeans say a secret Jewish cabal runs the world.
jpost.com 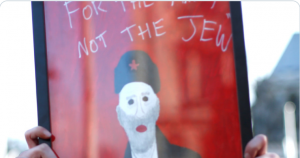 The secret network of Jews affects the global, political, and economic affairs of the world, according to 20% of Europeans. #Antisemitism is a law of nature, because only unity can heal the world from all its problems. The methodology of unification is #Kabbalah. Bnei Baruch.

The state of entry into the upper world is called a conception (Ibur): when one annuls himself before the upper, is completely in bestowal to the upper (in an ascent from Malchut to Bina), just as the soul was before falling into egoism. And now it seeks to return to the state of complete annulment before the upper.

The main request to the Creator: to go against my desires in joy as if I’m completely in bestowal, asking for strength to go above my desires, to be in the desire to bestow in joy, as someone serving a great master. But one doesn’t ask to see the greatness of the Creator but only for joy and bestowal AS IF one sees the Creator.

The inner force of breakage separates everyone from others and keeps them in a dream. When we begin to work on our correction, we attract the upper light that awakens us. We come back from the dream to reality and feel the true life, realizing that everything is one system, one soul.

Right now I don’t feel the common soul due to the force of breakage in me that doesn’t let me feel myself as corrected, perfect—in the only state that exists. Due to the inner breakage, it is as if I’m unconscious, in a dream, and must wake up from it.

There is one soul in the world and it is in every person who longs to practically reveal the upper force, the source of his soul. Each person, as he connects with others, attains a common soul, feeling the whole upper light as Adam—the only soul.

Everyone has a “point in the heart.” We have to annul our egoism to unite with the friends. The Creator unites us. As soon as I feel the connection: “I’m—to the friend, and the friend—to me,” I immediately feel the force of unity between us—bestowal, quality of the Creator.

If I don’t raise the request for my friends, MAN, nor raise the reflecting light, Ohr Hozer, the Creator suffers like a woman in labor pains: wanting to help but unable to, since no one can help the Creator give birth. We sinners are restricting the Creator from manifesting all His love and correcting the world.

The Creator as the bestowing force desires only one thing: for us to take this force and use it. If I can activate it and use it for the friend’s benefit, in so doing I give the Creator contentment. By connecting Him to those that need Him, I evoke in Him contentment from bestowing.

If I address the Creator with a correct request, I will see the Creator’s action in it. For I’m raising the reflected light (Ohr Hozer), and the direct light (Ohr Yashar) clothes in it, transforming into the inner light (Ohr Pnimi) that enters the soul, correcting and filling its desires.

If I concern myself with the Creator’s revelation to the friend, for his benefit and His benefit, I will feel the Creator’s actions in my request. After all, it is my actions that drew the Creator to help the group, and I will reveal this assistance as it will pass through me. When you ask for others, you receive first!

The Creator cannot help those who ask for themselves. But through my request on their behalf I connect them to the Creator. The Creator doesn’t have the reflecting light, He cannot manifest His force of bestowal differently. I give Him my manifestation, Ohr Hozer, allowing the Creator to work and receive pleasure.

The Creator made it so man cannot independently rid himself of self-love, but would need the Creator to help him. How does the Creator help? With the holy soul, i.e., the will to bestow. Man has no desire to receive the light of bestowal, he is willing to keep content with keeping the commandments…

#Exodus from Egypt is followed by reception of #Torah. We consent for the upper light to separate us from the ego-intention. The will to enjoy remains with no intention and joins the intention for the sake of bestowal—this is entry into the land of #Israel Flag of Israel.

#Exodus from Egypt happens in several stages:
1. We feel completely enslaved.
2. We feel a growing objection to slavery and servitude.
3. We are ready for anything—if it helps us run away from slavery—even to jump into the Final Sea [Red Sea], since “death is better than such a life.”
4. We cross the Egyptian border!
#Passover

We rely on the connection with one another—and thus correct everything.

“We are only elevated in sanctity, never lowered.” We are now revealing a new empty space of our soul—we must fill it with the force of faith, the light of Hassadim, and then the light of Hochma. That is how we build the degrees and connections with the Creator.

A new empty space is being revealed in us—uncorrected desires. We must put them to good use, attach them to the work—that is how we rise to a new degree. Precisely this state, in which there is no feeling or reason, serves as material for the next degree, a new ascent.
From Twitter, 3/5/20

Overview Of The World Kabbalah Convention 2020