Why Is it Important to Emphasize the Hebrew Language’s Holiness and Purity?

As we reach this year’s Hebrew Language Day, which is celebrated in Israel annually on the birthday of Eliezer Ben Yehuda, who is known as the father of modern spoken Hebrew, I would like to emphasize the holiness and purity of the Hebrew language.

In an age when social media culture generates all kinds of hybrids within the Hebrew language, I see importance in making a special effort to strive for a pure Hebrew. The importance stems from the fact that the original Hebrew language points to the nation’s internal intelligence.

Why is this especially so with Hebrew?

It is because, unlike other languages, Hebrew has been consistent for generations, ranging from the Bible to its contemporary form. Indeed, Hebrew constantly evolves, changes and diversifies, but for instance, if we would speak to King David using the Hebrew we now have, the chances of his understanding would be higher than, say, a medieval French king’s understanding of modern French.

Hebrew has a characteristic concise style that gets straight to the point. For instance, two or three words of Hebrew can often translate into four or five words of English. Also, more significantly, it is a language that is not the invention of people. As written in Abraham’s Sefer Yetzira (The Book of Creation) some 3,800 years ago, “the twenty-two letters—[the Creator] created His entire Universe with them. He formed all that was made and all that will be made with them in the future.” According to the wisdom of Kabbalah, the twenty-two letters of the Hebrew alphabet are twenty-two code signs, which Kabbalists use in order to describe the process of spiritual attainment.

Horizontal lines express the force of love and bestowal in the soul.

Vertical lines express the lights, i.e., the spiritual pleasures that fill the soul.

Therefore, the twenty-two shapes of the Hebrew letters express twenty-two types of the soul’s filling by the upper light.

When we create the Hebrew letters in our souls, meaning that we attain those spiritual qualities, and do so with the intent of loving and bestowing to others like the Creator, then we become like Him. We then understand the Creator’s modus operandi and feel the eternal state of creation.

The Kabbalists codified spiritual states in the Hebrew letters, expressing their ascent from this corporeal world to the eternal spiritual world. The twenty-two letters describe the experiential states they have undergone in their process of spiritual development. When these letters are combined into words and sentences, the Hebrew language emerges.

If we read Kabbalistic texts with the desire to discover the real understanding and sensation of the spiritual world, the power of the letters will open our soul. We will then truly begin to feel the spiritual reality and “speak Hebrew” in the fullest sense of the term. 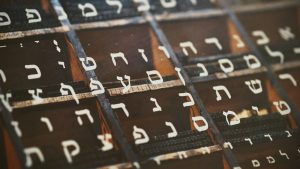