The most important thing is to give humanity an explanation of the future state, of the need to unite. It already exists in nature and must be revealed. If we are ready for it, then we feel the revelation as times of goodness. And if not, then we do not feel them as pleasant times and we suffer.

In relation to the Creator, we are always working above reason, since He is above our Kelim, our perception. We do not know Him by Himself, but reveal Him according to our reactions to His influence. The Creator’s revelation happens inside the vessel—”come and see”—as a result of our work among us, inside reason.

Bowing down before the friends means asking for others, not wanting anything for myself, but only for them to receive everything. This will be my fulfillment. I am inside of them and I care for them, ask for them, and can be fulfilled only by this. Such is the degree of my inclusion in the friends.

Creation divides into Israel and the nations of the world according to the force of desire that remained after the breakage. The point that awakens in a person and pulls him toward correction is called straight to the Creator (Yashar-Kel), Israel.
Such a person must receive help from above to organize the environment and the work from below.

When will my heart of stone agree that I have to unite with the friends? Only after many breakages and disappointments, that I will die unless I annul myself before the friends. A person goes through inner crises and agrees to do all that is necessary.

Mutual guarantee is the law of all of creation and the particular law of any person. If we correspond to this law, then we do not err and advance along the shortest straight line toward the goal of creation. If I cease checking myself for mutual guarantee, I will immediately stumble, fall, and get off the path.

“The end of the act is already contained in the initial thought.” We must now already see the final goal and the final state, verifying our every step by how much we are realizing that goal. Our entire path is the embodiment of the goal of creation, the finally corrected state and perfection.

The goal of creation is the general end of correction, and we must therefore constantly aspire to it. This will be liked by the upper force, which wishes for all to come to know it—from the least to the great. We must bring this knowledge to all the people of the world and provide them with a connection to the force of correction and unity.

We have to attain a connection with friends inside reason: connect with them, love them, and support them—inside reason. This projects the map of reality that must be ours to have—the structure of the soul that the Creator has given us to work with.

🇮🇱Israel’s obligation toward all of humanity determines all of our work, which is aimed at the final goal: to unite all creatures into one man, in adhesion with the Creator. The inner part of the Creator is Atzmuto, His essence, and the external part is His attitude to the creatures

#Antisemitic attacks are the initial signs of the final process of the general correction of the world by way of world war. We are living in the last generation, in the era of the end of correction. War will envelop the whole planet; everyone will begin settling the score with one another.
#Antisemitism #war

#Antisemitism, the #Holocaust, #Nazism—these are painful topics, but we have to open up this wound and check, in order to understand: what did we do wrong and how do we proceed? This is important in order to heal. The puss-oozing infection was internal and now the doctor is cutting it open in order to heal it, and that is obviously painful.

Humanity is standing at the threshold of world war. The topic at hand isn’t isolated extremist incidents, but salvation from a global catastrophe—a third world war, as described by Baal HaSulam. It can happen at any moment. It suffices to push a button—and half the world will be destroyed.
#war

We can participate in our development independently—then the stages will become pleasant for us and will impart us with understanding, attainment. We will undertake our own therapy with the upper force’s participation. The development will become desirable—we will look at ourselves from above, will desire to receive the force of bestowal.

With each passing day, it becomes more and more obvious that the world is in need of unity, otherwise it will all disintegrate into pieces. The glue is #unity, which can only be attained by #Israel’s example. There is no other path, according to the laws of nature.
From Twitter, 1/1/20 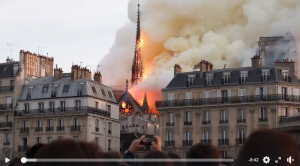 We keep coming back to reading the same articles, but we must see them in a new way every time, as if reading them for the first time. If I embrace the material as new, it is a sign that I am advancing. The article is old, as it is written “And you shall eat old store long kept,” but every time I find a new taste in it.1

Cascading from above down, the upper worlds pave the way for us from below up so that we eventually discover that we are standing at the bottom, at the foot of the ladder, which we should climb. Everything is already determined, every degree. The only choice is whether we go through this path in due time (Beito) for each stop, that is, according to a predetermined process moving from one degree to the next, or through hastening time (Achishena), accelerating our ascent in accordance with our efforts and thus changing its character.

All states are already predetermined, but we can enter them through our own will, requesting and making efforts to advance. If we move with the natural course of time, we stand before each degree until the conditions in the old degree force us to change. Therefore, it is a slow and unpleasant journey.2

Every person first belongs to the nations of the world, which belong to the externality of the worlds. When he understands that it is necessary to reach bestowal, which is possible only through our connection and mutual guarantee, then he reaches the internality and becomes Israel. At each degree we receive new conditions and implement them, moving from the left to the right line.3

We cannot artificially disconnect ourselves from expecting an egoistic reward, it all depends on the extent of our connection. The more we connect, the more we feel that we are dependent on the one. And when I depend on the one—one principle, one source—then everything else disappears from my field of vision because I cease to take it into account, relating everything to the single upper force beside which there is nothing. It all depends on our connection.4

Externality rules over us so that we can overcome this external control within us. Every person consists of an external and an internal part and with the help of the group, environment, and study, he must overcome the externality in order to scrutinize the internality and connect this internal part with the internal points of the friends. This is how we will reach the center of the ten where the Creator is certainly waiting for us.

Imagine how we, that is, our internal point, come to a heavy iron-bound gate, and if we are all connected, the gate opens and the Creator meets us on the threshold saying: “Well, where have you been! Come in already! The table is already set and everything is ready for the feast.”5
From the 1st part of the Daily Kabbalah Lesson 12/17/19, “A Handmaid Who Is Heir to Her Mistress”

Related Material:
A Handmaid Devoted To Her Mistress
To Restore The Mistress To Her Rightful Position
Before A Set Table

“Open For Me One Cleft”

Question: Baal HaSulam wrote, “Open for me one cleft in repentance, as the tip of a needle, and I will open for you gates for wagons and carts to enter.” Is this tip of a needle what we must open for the Creator in our heart?

Question: Who can open the opening?

Question: What should I do in order for them to do that?

Related Material:
There Is No Eye Of The Needle Without The Needle
Through A Needle’s Eye And Into A New World
How To Pass Through The Eye Of A Needle (Advanced)

Question: Can a student argue with the teacher?

Answer: I do not think that this is possible unless the student has risen close to the teacher. However, then they do not have an argument either. Perhaps, there are scrutinies of some not yet clear phenomena. What kind of argument can they have?

We are studying the upper system of governance of our world and the one who attains it has no doubts about its reliability. The one who does not attain it is floating in the air. For him, everything can seem either reliable or not—as he wants to see it. Therefore, this is a pointless argument. Nobody does it.
[255925]
From KabTv’s “Fundamentals of Kabbalah,” 10/27/19

Related Material:
The Joy Of Faith In The Teacher
Infallible Kabbalists?
Annulment Of The Student Before The Teacher

Lesson on the Topic “All Who Fault, Fault in Their Own Defect, and Love Covers All Transgressions”