“How A Trip To The Moon Makes Everything Clear” (Thrive Global)

Thrive Global published my new article: “How A Trip To The Moon Makes Everything Clear” 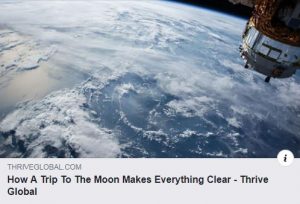 I like listening to astronauts describe their feelings after looking at the Earth from space. What’s interesting is that astronauts are generally quite mechanical, not openly displaying their emotions. But when they travel into space and see the planet as one small nest full of little chicks, then these generally unemotional people express very deep and touching feelings, as they paint a vivid picture of the integral system we share.

“It suddenly struck me that that tiny pea, pretty and blue, was the Earth. I put up my thumb and shut one eye, and my thumb blotted out the planet Earth. I didn’t feel like a giant. I felt very, very small.” — Neil Armstrong

“The biggest joy was on the way home. in my cockpit window every two minutes — the Earth, the Moon, the Sun, and a whole 360-degree panorama of the heavens. And that was a powerful, overwhelming experience. And suddenly I realized that the molecules of my body, and the molecules of the spacecraft, the molecules in the body of my partners, were prototyped and manufactured in some ancient generation of stars. And that was an overwhelming sense of oneness, of connectedness. It wasn’t them and us, it was — that’s me, that’s all of it, it’s one thing. And it was accompanied by an ecstasy, a sense of ‘oh my god, wow, yes,’ an insight, an epiphany.”– Edgar Mitchell — In the Shadow of the Moon

Therefore, to see myself realistically means to try and see the planet as one nest that everyone shares as chicks. I then need to be concerned that the nest won’t become unstable or break.

It’s a completely different sensation to the one where we feel “grounded” here on Earth. It’s a different dimension, because you feel it as a place detached, dependent on air. Your nest doesn’t rest on any tree. It’s simply in space. Beyond that globe and its atmospheric layer… nothing.

Humanity needs to grow up and see its true integral form. How much longer can we keep letting ourselves behave like wild children, flexing our pride and power muscles at each other? It’s the worst and most irresponsible form of childishness.

“I really believe that if the political leaders of the world could see their planet from a distance of, let’s say 100,000 miles, their outlook would be fundamentally changed. The all-important border would be invisible, that noisy argument suddenly silenced.” — Michael Collins, Apollo 11