“Amazon Fires And A Burning Need For Human Connection” (Newsmax)

My article in Newsmax: “Amazon Fires and a Burning Need for Human Connection” 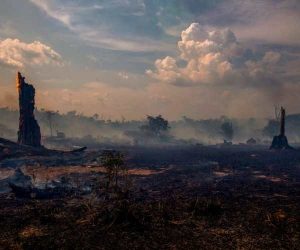 The ripple effect of thousands of Amazonian fires is sensed across the continents.
As if humanity needed a reminder of the interconnected, integral, and rounded world we live in, the record devastation of the South American rainforest has produced a global outcry. There is mounting international pressure on Brazil to save the Earth’s largest rainforest, an area around half the size of the U.S., which produces 20 percent of our planet’s oxygen. But restoring the “lungs” of the planet depends solely on mending the exploitative and destructive relations on the human level.

Now the focus is on the Amazonian fires, allegedly set by ranchers and farmers to clear land for cultivation and cattle, but it is important to keep in mind that the global environmental crisis requires a wider perspective. Even though impressive satellite images show that an area the size of a soccer field is burned in the Amazon every minute, let’s not forget that the effect of the world’s environmental problems such as global warming, melting glaciers, unprecedented high temperatures, air and ocean pollution, and ozone depletion are no less appalling in their consequences for people’s quality of life.

Addressing climate challenges demand a broad outlook because the entire ecosystem is integral. There are four levels in nature: still, vegetative, animate, and human. The climate crisis currently affecting us stems from flawed human interactions alone and not as a result of people’s corporeal actions. It is an outcome of our broken relations and lack of inner connection. As our sages wrote, “Man is a small world; the world is a great man.” (Avot d’Rabbi Natan, Chapter 31)

If we develop positive mutual relations at the level of our thoughts, attitudes, and behaviors toward each other, we cause a ripple effect both throughout human society and nature. But, if we relate negatively to one another, aiming to harm and exploit each other for personal benefit, then we experience negative reactions from nature.

The fires in the Amazon give humanity an enlightening lesson about our relationships: It is revealed how interdependent we are, and on the other hand, we see how our ego makes us take advantage of others. The contradiction between the two makes crisis break out in every field. This time the focus is ecological, with emphasis on the fires in the Amazon, but it manifests in all levels of nature. From this lesson, we must become aware of the absolute integral system we live in, which increasingly reveals itself before our eyes.

A Demand for True Global Leadership

As long as our egoistic approach remains unrestrained and unregulated, and as long as no country really cares about the global ecological balance but only its own territory, there is no reason to point an accusing finger at Brazilian President Bolsonaro for rejecting the G7 leaders’ financial assistance led by Emmanuel Macron. Bolsonaro understands very well that the West’s motivation to help him stems from a desire to exploit his country’s natural resources, as expressed by world leaders who have held conferences only for their self-promotion.

My recommendation to the President of Brazil is that he should demand from the wealthy countries at least $20 million per month for the world’s oxygen produced by Brazilian rainforests. By the way, this sum is a mere pittance — half the cost of the G7 summit in Biarritz to which France diverted its taxpayer’s money. Although this pressure would most likely provoke even more fiery reactions among world leaders than the burning forest, it would also raise awareness about our human nature and the need for mutual responsibility between peoples and countries.

Even if we apply pressure on politicians, donate millions to stop deforestation, reduce meat consumption and cease importing meat from Brazil, we will still need to cure not only the compromised lungs of the planet but the entirety of humanity’s body.

How can we make the broader healing of humanity possible? It can be done by igniting human connection: the education and promotion of the need to connect today, and a method for how to connect.

Why would we want to do so? It is because we all live under one common roof, where the world is our home. Protecting and preserving our common future depends on our understanding that divided we perish, united we thrive, and we take the entire surrounding nature with us.
[252004]