Know The Essence Of Things Through Letters

Question: What does it mean to know the essence of things through letters?

Answer: First, it is necessary to understand each letter, what elements it consists of.
Without going deeply into the details, each letter is a certain combination of the light of Hochma and the light of Hassadim, receiving and giving, their variation and mutual alignment between each other.

In other words, how much can I give in order to receive something? Or vice versa, how can I receive and what should I give for it? These are different things, although they seem the same. It depends on what is ahead.

Secondly, letters cannot arbitrarily follow one after the other. There are letters that cannot stand together, they must have a certain sequence.

Letters represent light. According to the structure of the spiritual system, there are five Sefirot: Keter, Hochma, Bina, ZA, and Malchut. Until the middle of Bina, there are no letters, only abstract light. 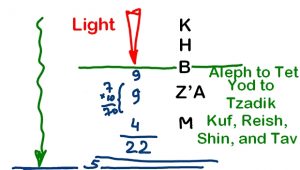 Starting from the middle of Bina and on, the upper light enters the Kelim (vessels), desires. Therefore, there are nine letters in the lower part of Bina, nine in ZA, and four in Malchut, twenty-two letters in total.

They cannot be more or less because that is the number of Sefirot from Bina to Malchut, i.e., each Sephira corresponds to a certain letter. Moreover, at different levels Sefirot can be denoted by different letters. There are also five additional letters (Manzepach), which are placed at the end of words to complete the entire development from top to bottom.

According to Gematria (the numerical value of the letters), the first nine letters from Aleph to Tet are single unites, from Yod to Tzadik tens, and the last four letters Kuf, Reish, Shin, and Tav represent hundreds.
[244839]
From the Kabbalah Lesson in Russian 1/6/19

Filed under: Language of Branches, Structure of the Universe | Add Comment →

Thought Is The Greatest Force