“We all reject the deceitful allegation that BDS as such is anti-Semitic and maintain that boycotts are a legitimate and non-violent tool of resistance.” 240 Israeli and Jewish academics signed an open letter calling on the German government to rescind the bill stating that the boycott movement is anti-Semitic .

In a letter posted on the BDS website, they also call on the German government “to maintain direct and indirect funding for Israeli and Palestinian NGOs, which challenge the Israeli occupation.”

But what makes educated, reasonable Jews living in Israel express deep solidarity with organizations that delegitimize and tarnish their country? How do they envision the future?

It is a well-known fact that in all the international organizations, especially those working against the Jewish people and the State of Israel, such as the BDS, there are Jewish and former Israeli workers.

In fact, they are the greatest anti-Semites. This is their way of avoiding their true mission, and disassociating themselves from their spiritual roots. Some of them even believe that if they are assimilated, they will get rid of the “Jewish gene” that is embedded in them.

However, according to Kabbalah, this is impossible. Jews will forever remain Jews. They carry a spiritual root that is beyond their biology.

When a Jew feels growing hatred to this uncontrollable situation, which prevents him the freedom to choose who he is, he develops hatred towards the essence of the being Jewish. A hatred he cannot even explain to himself, but it is strong enough to motivate him to act aggressively against the Jewish people.

Therefore, some of them feel deprived and stressed by anti-Semitism – or rather anti-Israelism – and in order to escape the hatred toward them, they live in various countries around the world, trying to conceal their Jewish identity.

Whether consciously or not, they gradually become Jew haters. And there are others, who instead of leaving Israel, continue to earn a living, study and teach in Israel; yet in their hearts feel rejection to this place. They are those that would sign a letter of support for an anti-Semitic organization from their air-conditioned office behind the walls of an Israeli academic institution.

Every person can express himself as he sees fit, but not against the destruction of the other. Freedom of expression must be given to anybody that calls for peace – but not through means of negation and annihilation. Certainly not through anti-Semitic messages — we have had our fill of them.

If the academics are concerned about the fate of the State of Israel, then they would do well to open the history books, and the authentic sources of the Jewish people, and investigate the role of the Jewish people from times past to the present. To summarize for them: the role of the Jews is to be “a light unto nations.” The Jews carry the method for connecting all of humanity, but have no awareness of their role, or the weight of their responsibility towards the world.

When Jews unite and spread the system of human connection to the world, anti-Semitism will dissipate and all boycotts, demonstrations and accusations against the Jews will subside. The message is simple: rather than join hands to sign declarations, we need to join our hearts and be as one. 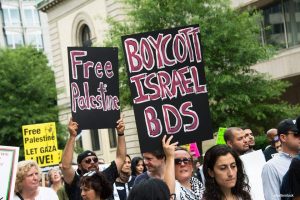