The riots taking place in the heart of Paris are the seeds of an inevitable change in the rules of the socio-economic game in Europe.

The “yellow vests” people protest the rise in fuel prices and cost of living as they are vandalizing the streets, torching cars and pillaging shops on the Champs-Elysées. Even the statue of Marianne, the national symbol of freedom originating in the French Revolution, was not immune to the wrath of the protesters.

These violent acts express a growing sense of deprivation and exploitation that people feel towards their government. Beyond those who take to the streets, many are beginning to sense that the ruling elite is concerned with its own interests, with no regard to the needs of its citizens. They are beginning to realize that their leaders have one mission in mind: to preserve their throne in every possible way.

And when modern Europeans feel like they are being dispossessed from the little they have left in their pocket – everything becomes permissible. Their barbaric side comes out and their rage translates to violence, plunder, and chaos on the streets. Even if a person risks being shackled in prison the next moment, the erupting human ego cannot be restrained.

Meanwhile, French President Emmanuel Macron was in Buenos Aires at the G20 summit, sitting around the table with other world leaders, as each of them maintains focus of their personal interests. In their case, the ego blinds them from seeing the intricate network of global interdependence that connects them. Every leader is busy tying another knot, ignoring how the reality around them is unraveling.

Setting the tone at the summit, Trump secures his country’s interests. He reaches understandings with his Chinese counterpart, to forge an agreement that will benefit both countries. The U.S. president typically demonstrates isolationism, yet with a clear aim to benefit his country. He does that, for example, by blocking the entry of illegal immigrants into America, unlike Europe, which keeps its doors wide open.

Europe in its deteriorating state is somewhat reminiscent of the Soviet Union in its pre-disintegration period. Social polarization is intensifying daily, there are many clashes of interests between leaders, and some countries are seeking to withdraw from the European Union – all the while waves of immigration continue to shake the socio-cultural fabric of the continent.

However, the powerful blow that will shock Europe will be the dissonance between affluence and poverty. While billions of euros are flowing across the European Union, the middle class is becoming poorer and angrier. At the same time, an unparalleled technological-industrial revolution is fast approaching, threatening hundreds of millions of jobs.

When approximately 60% of the public in one of the European countries find themselves out of the workforce and unable to return to it, changing the rules of the game will be inevitable. It is easy to envision a “European spring” scenario where riots – as we just saw in Paris – spread like wildfire across Europe.

Even today, a group of statisticians from Poland predict that we have about 12 years until a “global financial crisis of unprecedented scale” takes place. But in a globally integrated system, where every part is intertwined with everything else, such a crisis may certainly occur beforehand.

The first, necessary step in changing the rules of the game will be to provide some form of basic income to every person that will cover the basic necessities for life. However, bread alone will not satisfy the human being for long. A guaranteed income will appease the body, but not the spirit.

Economics is a reflection of human relations. It’s about what one gives to and receives from society. Therefore, if one will receive what he needs from society, and will no longer be judged by his socioeconomic status, social values will have to change.

Many will compete on the formation of new social values. Leaders, religions, radical activists, and various ideologies. But only one social concept will be capable of uniting Europeans and maintaining peace on the streets. It is the concept that will be in balance with the natural course of human development. The concept that will make every person recognize that we are all connected and interdependent. It will raise humans to a higher level of consciousness, introduce them to a deeper level of connection, and infuse their spirit with a new motivation. Ultimately, the quality of connection between people will be the basis for a healthy, new society and economy. 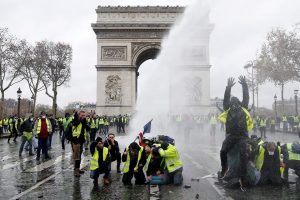 Grab Hold Of The Goal

“The Nation Of Israel Is The Only Nation With No Biological Root“ (The Times Of Israel)
Podcast Powered by podPress (v8.8)