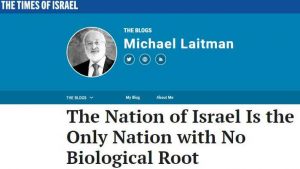 The nation of Israel is the only nation in the world with no biological root.

Unlike other nations, which emerged from shared parents and a small group, the nation of Israel has no biological parentage. Instead, it emerges from ancient Babylon, where Abraham the Patriarch connected people from different nations based on a spiritual idea: the need to love and unite above all differences.

If the people who make up the nation of Israel unite based on this spiritual idea, then they can be considered as a nation. Likewise, there is no basis for them to be called a nation if they fail to aim themselves at love and unity. Especially today, the nation of Israel is visibly not a united people. From those who want to completely disidentify with being Jewish, to those who are against the existence of the State of Israel, as well as sharp divisions in views across various political, religious and secular factions, they can be compared to nuts in a bag: if there is pressure on the bag, then they are forced to come together, but if that pressure goes away, then they disperse in different directions.

Therefore, in our present reality, the nation of Israel is only a nation in potential. It is a group that has the potential to unite based on the spiritual idea of “love your friend as yourself” (Leviticus 19:18) and to be a positive example of such unity to humanity (“a light unto the nations” [Isaiah 49:6]). In other words, the group that emerged in ancient Babylon, which comprised of representatives from different nations who had a desire to unite above their inborn differences and achieve a positive and complete form of unity, received the method of how to unite from Abraham.

It was in order for them to pass the method and example of unity on to humanity at a time when humanity would need it. Today is such a time. Today, the human ego, characterized by the desire to enjoy at other people’s expense, has grown to overblown proportions. It sparks increasing divisions in societies and spurs conflicts between peoples and nations. Therefore, the need for unity, and a method and example of how to unite above any and all differences, rises in parallel with the increasing ruptures in human society.

Until the unifying potential of the nation of Israel becomes actualized, anti-Semitism will increasingly surface to pressure the Jewish people to actualize unity above their differences, and then pass this example onto humanity.
[237993]