The Times Of Israel: “Why The World Never Gets Tired Of Hating Jews“ 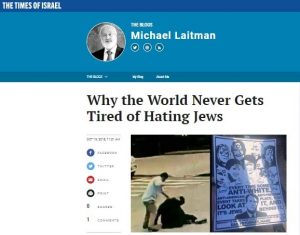 As he did every morning, Leopold Schwartz (62) walked to the Borough Park synagogue in Brooklyn. At 7:30am, as documented by security cameras at the neighborhood junction, one of the drivers got out of his car and brutally attacked Schwartz, who was stunned and couldn’t do much to defend himself.

“I tried to protect myself, I tried to run away” says Schwartz. “I screamed: ‘What do you want from me?!’ And as Schwartz fell down, the attacker continued to beat him with all his might until a man who passed through the area came and tried to help Schwartz. Later it turned out that he, too, was attacked and wounded.

This outrageous incident is not even the first case of violence since the beginning of the week. In a shocking video, another Jew appears to run for his life in the streets of New York as he is chased by a bully who is beating him vigorously with a cane. In London, an elderly Jewish woman who protested anti-Semitism got kicked in the face. And these are just a few of the reported incidents.

Surely, these violent acts are a direct extension of ongoing anti-Semitic propaganda. Not a day passes without defamation and hatred expressed towards the Jewish people in one way or another. This flier, for example, was posted on four US college campuses just last week.

A glance at Jewish history reveals that a blaming finger was always pointed at them. It’s as though there is an unspoken consensus, transcending time and culture, that “Jews are guilty until proven otherwise.”

Numerous times the Jewish people were facing annihilation, beginning with the mass slaughter of Jews during the great revolts against the Romans and the Greeks, through the pogroms and persecutions carried out under the guidance of the Church, the blood libels throughout the Middle Ages and the modern era, and of course, the Holocaust in Nazi Germany. No other nation was threatened to be erased from reality so many times.

What we’re witnessing today is merely another expression of the recurring pattern of inherent, natural hatred that has always haunted the Jews. At every stage in history, hatred of Jews takes on a different form and has a different justification, be it economic, religious, political or what have you. Anyone can find the reason that works for them.

The authentic wisdom of Kabbalah has an unorthodox explanation to this phenomenon. Firstly, Kabbalah views all of humanity as a single organism, or a single network. Within that network, the Jewish people is designed as a mini-model that reflects the whole of humanity, and acts as a central “hub,” responsible for the connection throughout the network.

Hence the instinctive, deep-seated demand from the Jews, which can easily manifest as hatred in our world. With every accusation, persecution, rejection, or threat – the world calls upon the people of Israel to fulfill their natural duty and enable a new level of connection across the whole of humanity.

Subconsciously, the world feels that Jews carry a certain responsibility for all of the world’s problems and hold the key to its better future. Thus, the world’s pressure on the Jews is embedded in the evolution of human society. As written, “there is no calamity that comes into the world but for Israel” (Tractate Yevamot, 63).

Sooner or later, the people of Israel will have to accept their responsibility towards humanity, and usher in the next level of human development. Jews of all walks of life have to set the example of unity and connection above all differences for the sake of the entire world. Until we do that, the world will not get tired of hating Jews.

New Life 532 – Kabbalah Congress, Leaping To The Goal Of Creation