This week we had a new guest at our center – Yossi Vassa, stage performer, actor, comedian and playwright of theatrical productions for children and adolescents, as well as other entertainment programs. 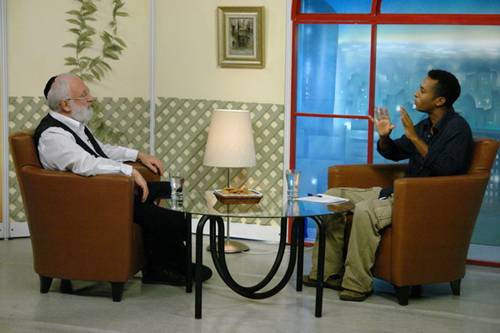 Yossi is successful not only in Israel, but also on Broadway, in Mexico, England, and other countries around the world. This intelligent and energetic young man repatriated to Israel from Ethiopia, and feels concerned about the unsuccessful absorption of his Ethiopian community in Israel. I have known him for a long time because my daughter’s fiancé, Shai Ben Attar, is the script writer and stage director of Yossi’s plays.

During our conversation we reached the conclusion that there is no such thing as a Jewish nation, but only a gathering of outcasts and refugees who haven’t been able to become a nation. This is because in the past, 3,700 years ago, the Jewish nation was created by means of the spiritual idea of union and brotherly love, above people’s individual egoism – and they attained this through the influence of the Upper Light. However, 2,000 years ago they fell from the level of “love for one’s neighbor” into hatred, and scattered like a bunch of nuts that fell out of a sac.

Now, the only way for us to gather back together and become a nation is by reviving the same foundation that existed back then – love for one’s neighbor. Only Kabbalah can provide this, or rather, only the Light that it evokes. We at Bnei Baruch hope that we will be able to evoke this Light and thereby bring the entire world to peace.

Instead of Forcing Yourself to Be Social, Let the Light Do Its Work