Is Manifestation Of Wars In The Corporeal World Necessary?

Question: War is inevitable in the inner world of a person. He will always be at war with his egoism because the evil inclination is what the Creator created. But is the manifestation of war in the corporeal world necessary?

Answer: If we do not allow the internal manifestation of wars, then we will reach an external balance as well.

Question: Of course, it is easy to talk about wars and write books when sitting in the laboratory. But when there is shooting under your window and your relatives are dying, how can you behave in such situations?

Answer: The most important thing is education. We have already talked about this many times in our conversations.

Unfortunately there is no education in our world that would completely direct a person only to searching for the middle line between the right and the left ones.
[295050]
From KabTV’s “Spiritual States” 3/1/22

Related Material:
War Will Erase Everything
Will There Be A War?
“The War — The Spiritual War” (Medium)

The Book Of Zohar—A Study Of The Creator

Rabbi Shimon Bar Yochai [author of The Book of Zohar] was revealing the secrets of the Torah, and friends were listening to his voice, connecting with him, and each contributed his part to this unity (The Ramchal, Adir BaMarom (Mighty on High), 24).

Rabbi Shimon and his nine disciples had such a strong desire to attain the Creator in all states of their interaction that they managed to create a mutual inner connection between them. This means that “friends were listening to his voice, connecting with him.”

They were reading passages from the Torah, each of them reacted to these texts, described their feelings, and completed the others, and one was responsible for writing down the words of all the disciples.

Since they were connected with each other, they expressed their impressions from the common source, the Creator, whom they were attaining, feeling, and thus could analyze, verify, influence Him, and receive an answer from Him.

That is, their impressions from this common source is a very serious study of the Creator.
[295002]
From KabTV’s “Spiritual States” 2/15/22

The Paradox Of Life

What determines that some people suffer more and others less? It is from the inner basis of a person, from his place in the general system, because he is as a certain cornerstone in it responsible for the entire system, and therefore, he must be pushed more sharply toward correction.

There are no dealings with individuals as is commonly believed. Never! Because the system is general. Only the inclusion of a person is taken into account.

None of us live on our own. Can a single cell exist in the body on its own? If it lives only for itself, then it turns into a cancer cell. It must give itself completely to the whole organism. Only for its sake does it exist, by its order it dies, by its order it functions without any thought of itself.

Imagine what a balanced system it is! It is like you are hanging in the air and everyone has to think about everyone. As soon as somebody thinks of himself, everything collapses, you fall.

We exist in exactly such a system. It turns out that by taking care of each other, we come to a state when we rise above the level of our existence.

What is the paradox? If my animal body exists and thanks to it I exist as a human above my animal body, then when I consciously connect with other people into a single harmony, I will begin to feel my existence at a higher level, at the level of the Creator.
[295008]
From KabTV’s “Close-Up. Partnership Agreement” 4/7/10

“How Can I Become More Empathetic?” (Quora)

Michael Laitman, On Quora: “How can I become more empathetic?“

A student at a school approached his teacher, because he saw a girl who had come to school in a torn coat. Since it was winter and her coat was inadequate to stand up against the cold weather, the student suggested a trade setup where anyone could give whatever they wanted with the aim of making sure that every kid in school would have an umbrella, boots and a coat for winter. The teacher was very moved, shared the idea with the parents, and it was set up in two hours.

A question that arises from this heartwarming situation is why are we all not as sensitive as that child? Obviously, we would find ourselves in a much more positive reality if we were.

We adults are bigger egoists and are much more inclined to pay attention only to what is ours. We have been created in such a way where we feel increasing detachment from each other in order for us to develop a sincere prayer for help: to have our hearts opened so that we can feel others similarly to how we feel ourselves.

By reaching such an inversion of how we feel reality, then we would feel connected, close and understanding of each other. We would then all feel like one body. We would have no holes in our coats, and would feel ourselves as parts of the upper world—of love, bestowal and connection. 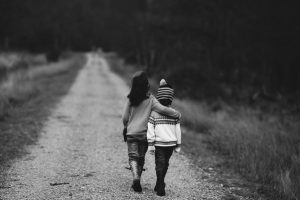 Writings of Baal HaSulam “Introduction to the Study of the Ten Sefirot,” Item 31