“If Ben-Gurion Were Alive Today” (Linkedin)

My new article on Linkedin “If Ben-Gurion Were Alive Today” 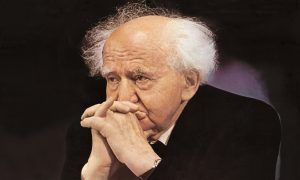 Last Wednesday, Israel marked the 35th Ben-Gurion day, commemorating David Ben-Gurion, the leader of the Jewish community in Palestine before the establishment of the State of Israel, and the first prime minister of Israel after its establishment. He was not only a political leader, but also a visionary who dreamed of the people of Israel realizing the ultimate calling of the Jewish people, “Love your neighbor as yourself.” Israel’s failure to achieve it was probably the reason he eventually departed from public life and retired to the desert. If he were alive today, he would see how right he was in doing so.

On January 15, 1949, a few months after the establishment of the State of Israel, David Ben-Gurion gave a monumental speech that was to become known as “Revolution of the Spirit.” In that speech he repeatedly proclaimed that the great human calling of the Jewish people was love of others. “‘Love your neighbor as yourself’ is the supreme commandment of Judaism,” he said. “With these words, the eternal, human law of Judaism has been formed… The State of Israel will be worthy of its name only if its social, economic, political, and judicial structures are based upon these eternal words.”

Ben-Gurion did not wish for the Israeli society to resemble societies of other democratic countries. He believed that love of others is not inherent in humankind and must be taught through education. In his mind, the judicial system, too, would not only require people not to hurt others, but also that they actively participate in establishing solidarity. “‘Love your neighbor as yourself’ is more than the commandment of the law,” he declared. “A principle of law can be interpreted in a passive, negative manner—not to deprive, steal, rob, or harm. Jewish law does not settle for these; it is not enough to refrain from hurting others. Human relations must be built on a common fate, mutual help, friendship of equals, and love of others. Only on the basis of the commandment ‘Love your neighbor as yourself’ will the State of Israel be true to the great human calling of Judaism. Only in this law will the key to Israel’s laws and ordinances be found.”

To achieve this sublime vision, Ben-Gurion saw legislators and attorneys as the guardians responsible for fashioning the image of the country. However, he did not leave the responsibility solely on their shoulders. He demanded that everyone participates in the process, to the last person on the street. In his vision, people would obey the law not because they were afraid of punishment but because it was “built on reciprocity and mutual help of all citizens, Jews and non-Jews, [and] everyone knows that in the State of Israel, it is not homo homini lupus est (man toward man is a wolf), but friends and helpers.”

When we think of education today, we think of acquisition of knowledge. In Ben-Gurion’s eyes, knowledge, as such, was of secondary importance, although he valued the contributions of great scientific minds like Einstein’s. Nevertheless, he realized that our strength lies not in knowledge but in fashioning a united society, and pushed for education of the entire nation toward that purpose.

Accordingly, the army was to be an educational tool no less than a military one. “Fundamentally, the army is an educational entity,” he said, “We shall not have an army that does its duty in our historic conditions if it is not accompanied by a greater educational effort than in all the armies in the world. The army must be the school of the youth, the cradle of the unity and strength of the nation.”

Ben-Gurion was well aware of the division and alienation among Jews in his days. “We all love immigration, but very few of us love the immigrants,” he quipped. But in a more serious tone, he realized that “immigrants will not be absorbed without a great educational effort … both among the residents of Israel and among the immigrants.”

Indeed, although Ben-Gurion realized the great importance of education toward unity and went to great lengths to realize it, the nation grew increasingly divided. In the end, Israel’s most charismatic leader and one of its greatest visionaries in modern history had given up. In 1970 he retired to a hut in a kibbutz in the Negev desert and spent the final three years of his life there working on an 11-volume corpus describing the history of Israel’s early years.

Since his departure, educating the people of Israel has only become more urgent. We have lost all sight of our vocation and the reason for our being here. Instead of exemplifying unity, we demonstrate internal loathing and division. We did not educate ourselves toward unity, and now we are suffering the consequences.

Nevertheless, as long as we are here, there is hope for change. We must still employ education toward unity. It should be mandatory, and it should encompass the entire nation, all ages and all factions. As Ben-Gurion said, unity is not a prerogative; it is vital for our existence.
[289946]

“No Need For A Metaverse; A Pill Will Do” (Linkedin)