Nation Based On Ideology

Question: Why do Jews unite only at the moment of danger?

Answer: The Jews have no natural power of connection because they are not a nation. They came together not on the basis of blood alliance or belonging to some families, but on an ideological basis. The rest of the Babylonians began to settle on the Earth in clans, the so-called Hamuls. Some went to the west, some went to the east.

Therefore, the people who joined Abraham did not feel blood kinship and were guided only by their ideology. It turns out that when the ideology between them is strong and they want to unite, to rise above our world, then they are really a nation. And when this ideology weakens and disappears, they feel like a disunited herd and become such in exile.

Comment: But in exile, Jews somehow support each other.

My Response: They hold on only because they are hated by other nations, and not because they themselves strive for connection.

If it were not for the method of connection, which is in their hands, there would be no such nation at all. The fact that they married among themselves is not an indicator of the nation. We are only an ideological group with a certain spiritual purpose and nothing more.

Related Material:
What Kind Of Unity Does The Wisdom Of Kabbalah Tell Us About?
Uniting Above All The Differences
It Is Impossible To Hide From People

Filed under: Ancient Babylon, Israel, Nations of the World - No Comments →

Help In Getting Closer To The Truth

Question: Kabbalists write that we live in the last generation when all people are seemingly ready for correction. Does this relate to the phenomenon that today anyone can create some kind of video material and theoretically all eight billion can watch it?

Answer: Yes, such a possibility exists because we are really becoming one single humanity, as one man with one heart. This is connected to the program of development of humanity. We just need to learn how to use it correctly.

Question: Are you satisfied with the clips and films that your students produce?

Answer: I have seen part of them and I can say that, in general, they help people get closer to the truth.

Question: Do you envy your students who can convey information about the spiritual world in a simple way?

Answer: Yes. Sometimes they can convey it much easier, livelier, and more intelligibly than me.
[288247]
From KabTV’s “Spiritual States” 9/10/21

Related Material:
It Feels Like This Is The Truth
The Truth About Jews And Gentiles
Where Is The Truth?

Do We Need To Develop The Ego?

Question: We need to develop the ego as much as possible in order to attain the Creator. But what if a person is not an egoist?

Answer: We do not need to develop the ego. This is totally wrong. The ego will develop by itself.

We do not need to worry about becoming wicked. On the contrary, we need to try and be good, and then we will become wicked because increasingly greater negative attributes will begin to appear in us so that we can correct them.

On the other hand, if I do not succeed in this correction, I will not be given more negative attributes because I cannot cope with what I already have.

Question: If we compare the ego to a nerve in our tooth without which the tooth cannot live, then if we compare Kabbalists to dentists, do they have to heal the aching tooth or remove it?

Answer: You cannot remove it. We will still need to correct the ego and nothing else will help us. We will simply suffer from a “toothache” much longer.
[253436]
From KabTV’s “Fundamentals of Kabbalah” 8/18/19

Related Material:
How Do We Develop The Suspended Ego?
“When The Ego Rots” (Linkedin)
A Leader Is The Greatest Egoist

Do Not Forget About The Friends

Question: What does it mean not to forget about the friends who are not near me? Must I specifically remember the friend’s name?

Answer: It is not necessary to remember or know anything specific. It is simply necessary to feel that we are all one big Kli and are now in a state like at Mount Sinai where we must receive the force of connection from above for the first time.

It is up to this force to create a state within us in which the Creator will be revealed. It may not be tangible yet, but we will at least feel that beside the negative egoistic power, the positive power is revealed, and we can work with both of them.

These forces will not annihilate but will complement one another. And we will be between them, as a useful burden. 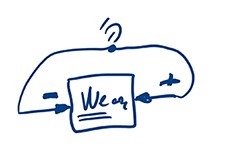 Related Material:
Envying The Friends
Annul Yourself Only Before The Friends Along The Spiritual Path
Between The Friends