“Six Days In June That Changed Israel For Good” (Linkedin) 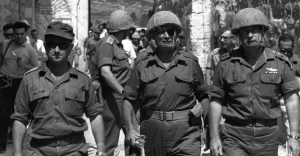 This week, fifty-four years ago, the Six-Day War broke out. Leading to it was a weeks-long period of stress and anxiety in Israel, knowing that a war was about to break out, and that the intent of the enemy armies was to wipe the country off the map, as they had intended to do in 1948, during Israel’s War of Independence. But fifty-four years ago, six days after the war broke out, a truce was declared and Israel found itself several times bigger than it was six days prior, and in control of all of Sinai, the Golan Heights, all of Jerusalem, and the West Bank.

At first, Israelis were ecstatic with relief. But soon, hubris settled in, conceit began to contaminate the nation, and division plagued the Israeli society. Since then, Israel has not been the same. The Six-Day War changed Israel for good, but for the worse, for the far worse. The prize for defeating the armies of the enemies hands down on all fronts intoxicated us and turned us into arrogant fools. Instead of using the victory to show the world what Israel was really for, we bragged that Jews, too, could be strong.

The world does not need strong Jews; it needs spiritual leadership, guidance toward love of others, as our own Torah teaches. The world has plenty of strong nations, but none that can bring unity to the family of nations. This is what it expects from the Jews. And since Jews began to boast in their military power instead of in their solidarity, instead of supporting the Jewish state, the world shifted its support to the Palestinians.

Our sages have always connected the prosperity and success of our nation with unity, and our failures with division. The book Masechet Derech Eretz Zutah (chap. 9), for example, writes the following about the power of unity: “Thus would Rabbi Eleazar ha-Kappar say, ‘Love peace, and loathe division. Great is the peace, for even when Israel practice idol-worship and there is peace among them, the Creator says, ‘I wish not to touch [harm] them.’’” However, “If there is division among them,” continues the book, “what is it said about them? ‘Their heart is divided; now they will bear their guilt (Hosea 10:2).’”

Even before the establishment of the State of Israel, the great kabbalist and thinker Rav Yehuda Ashlag, aka Baal HaSulam, wrote in an essay titled “The Freedom”: “The matter of social unity … can be the source of every joy … and the separation between them is the source of every calamity and misfortune.”

Six years after the Six-Day War, the Yom Kippur [aka October] War broke out and caught us completely off guard. We managed to pull through it and ward off the invaders, but we paid heavily for our hubris and complacency. Yet, even then, we didn’t learn the lesson. Since then, each time Israel faced a military campaign, we pulled together and won. But each time, our unity diminished. In the last campaign, Operation Guardian of the Walls, our unity has completely eroded.

The sweet nectar of a sense of omnipotence is a poison that is destroying our society. We have to understand that our military strength buys us time, but it will not hold out forever. Our unity is our real weapon since it turns our enemies into friends and unites the whole world around us, rather than against us.

Henry Ford, a rabid antisemite and one of Hitler’s role models, wrote surprisingly positive and hopeful words about Jews in his nefarious book, The International Jew: The World’s Foremost Problem: “The whole prophetic purpose, with reference to Israel, seems to have been the moral enlightenment of the world through its agency.” In another place, he writes, “Modern reformers, who are constructing model social systems on paper, would do well to look into the social system under which the early Jews were organized.” Indeed, as the book Maor VaShemesh writes, “The prime defense against calamity is love and unity. When there are love, unity, and friendship between each other in Israel, no calamity can come over them.”
[283462]

“Why Blows Come In Waves” (Linkedin)