“Disasters Will Hunt Jews Until Unity Is Achieved” (Linkedin) 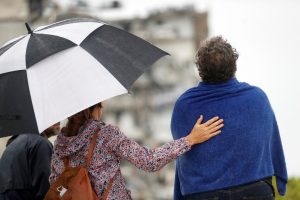 In a race against time, emergency workers try to find survivors of a residential building that collapsed days ago in Surfside near Miami, Florida. More than 150 people are still unaccounted for and the death toll rises every day. This tragedy knocks at the door in a neighborhood with a growing Jewish community, a community now in shock and disbelief at the disaster. Finally, the question arises of why it is that Jews are again at the heart of a new blow?

The cause of the collapse is still unknown, but according to the New York Times, almost three years ago an engineer expressed concerns about structural damage to the building that required renovations but which were never implemented. Whatever the reason, there is one undeniable fact: the Jews are at the center of yet another disaster. These are no longer obscure clues and signs but accumulating facts, a chain of events that connect and raise many question marks.

A recent stampede at the religious pilgrimage to Mount Meron in Israel—believed to be the largest single annual Jewish event in the world—left 45 people dead and over 150 wounded. A fatal collapse of a synagogue bleacher in Jerusalem on Shavuot night and other series of events prior to the tragedy in Florida have one common denominator: the Jews.

Using words as arrows to make their point, our sages wrote about the reason for Jewish afflictions: “No calamity comes to the world but for Israel,” (Yevamot, 63a.) The unfounded hatred which was the root cause of the destruction of the First and Second Temples is also characteristic of the Jewish people these days.

The Book of Zohar states that when separation prevails among the people of Israel, “They bring about the existence of poverty, ruin, and robbery, looting, killing, and destructions in the world” (Tikkuney Zohar, No. 30).

The breakage in our relationships as Jews is akin to the building collapse in Florida. When Jews fall into separation and do not lean toward oneness above all differences, then the cracks in their structural basis as a people weaken and their troubles increase, manifesting in different and unexpected ways.

Brotherly love among the Jewish people evokes a positive force with the capacity to neutralize all evil. This power corrects, straightens, settles, and balances reality as a whole.

An excruciating path would be to ignore the warning signs and delay the call for Jewish unity—the force which has been the foundation of the Jewish people since time immemorial. If Jews continue along the path of mutual hatred, they will gnaw away their cohesion until their bedrock is undermined and destroyed. Conversely, it is written in the book Maor VaShemesh, “The prime defense against calamity is love and unity. When there are love, unity, and friendship between each other in Israel, no calamity can come over them.”

Until Jews wake up and reach a common concern for one another, following an educational campaign that will bring Jews closer together and later all the people in the world, many more disasters will continue to befall them. That’s an annoying and infuriating truth. However, there is also a way to reverse the situation: through a real change of attitude toward each other, through unity as the pillar, as the precondition to shake off predicaments and thrive as a people, Jews can escape troubles. As the great Rav Kook wrote, “Since we were ruined by unfounded hatred and the world was ruined with us, we will be rebuilt by unfounded love and the world will be rebuilt with us.” (Orot Kodesh [Sacred Lights]).
[284245]

“Who Was Directly Responsible For The AIDS/HIV Epidemic Facing Africa Today?” (Quora)

“What Is Lacking In Our Education System?” (Quora)
Podcast Powered by podPress (v8.8)