The Torah is called a means for gaining freedom—freedom from the angel of death. During this life, we must go through four stages of the right correction and use of our egoism. It helps us from the other side, by harming us, it helps us rise above it.

By using the ego correctly, a person attains eternity. He begins to feel himself on a level above egoistic level. If only we could imagine what it means to reach this level! We enter a state that exists without consuming, not absorbing into ourselves, but only bestowing, as if you are outside of matter, outside of absorption. Such a state is determined in us and is felt by us as eternal.

This, in principle, is what Kabbalah gives us. It does not speak about this world at all, its nations, and lands, about how you settle down here with your problems: bank, work, health, and family.

Kabbalah only talks about how to bring a man to a higher level where you no longer exist in matter, and therefore, are eternal.
[279916]
From KabTV’s “The Power of The Book of Zohar” #8

Related Material:
The Four Stages Of Attainment
Partial Correction
The Four-Letter Name Of The Creator And The Three Lines

Hebrew Is The Language Of Spiritual Attainment

Question: Will there come a time when we will be able to penetrate the spiritual potential of the Hebrew letters a little? After all, modern Hebrew does not totally match this potential.

Answer: It is actually because they didn’t want Hebrew to be the official language of Israel at the time. It was never been used as a spoken language, only during the time of the Temple when the people were on a spiritual level. They used it only in order to explain spiritual actions, while for any other purposes they used Aramaic and then Greek.

Moreover, it was possible to use any language. There was no such thing as “we have our language and we will not use any other language.” On the contrary, Jews in Israel spoke different languages in different periods, which means that they used Hebrew only for spiritual purposes.

So when at the end of the 19th century Eliezer Ben Yehuda and other settlers came to Israel and suggested making Hebrew the official spoken language and many objected to this approach.

“Why should we use the holy language that was intended for expressing spiritual forces, for mutual cooperation between people above the ego, and for mutual cooperation between a person and the Creator, to print newspapers and to curse, etc.?” There are still such disputes today. Orthodox Jews don’t use Hebrew for any purpose other than for studying; they speak other languages, mainly Yiddish.

It isn’t a coincidence that the word “language” in Hebrew is also “tongue” because it is expressed in speaking, in writing, or in hearing.

When I express different letters, it affects the eardrum in different ways and also the auditory nerves, different parts of the brain, and so on. All the means of producing the letters, my “transmitters” are divided according to the division of the letters into five parts. 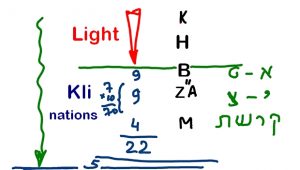 The forces that descended from top down, created and shaped a person, which is how the letters were formed through the four phases of direct light in the world of Ein Sof, which accordingly created our senses, our physical body, and everything else. We can therefore say that the letters created the world.

Question: Does this mean that for the time being Hebrew is a language that no one can attain?

Answer: Yes, it is attained only according to the level of a person’s spiritual attainment, not in any other way. We can speak about it and write different theories, but on the whole, it is not clear how it can be attained unless it begins to “speak” inside you, and for that to happen you must really be able to attain spirituality.
[244951]
From KabTV’s “Fundamentals of Kabbalah” 1/6/19

Related Material:
Spiritual Harmony Of The Hebrew Language
Hebrew, The Key To The Spiritual World
Hebrew – The Language Of The Wisdom Of Kabbalah

Filed under: Hebrew, Language of Branches - No Comments →