“No Police, No Justice, No Peace” (Newsmax)

My article in Newsmax: “No Police, No Justice, No Peace” 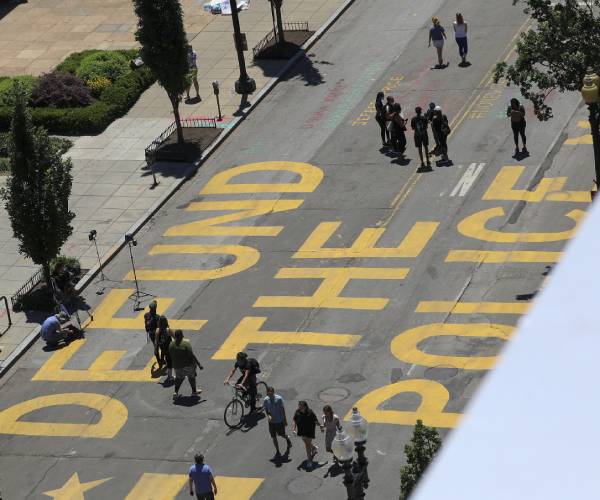 WASHINGTON, DC – JUNE 08: People walk down 16th street after “Defund The Police” was painted on the street near the White House on June 08, 2020 in Washington, DC. After days of protests in DC over the death of George Floyd, DC Mayor Muriel Bowser has renamed that section of 16th street “Black Lives Matter Plaza”. (Photo by Tasos Katopodis/Getty Images)

The death of George Floyd and the demonstrations protesting it could have sparked many plausible ideas for mitigating police brutality and racism. Complete disbanding of the police was not one of them. How can a society maintain law and order without the police? Who will protect honest retailers from looters such as we saw in the past two weeks?

According to Webster’s Dictionary, the police are “the department of government concerned primarily with maintenance of public order, safety, health, enforcement of laws and possessing executive, judicial and legislative powers.” The police are also “charged with prevention, detection and prosecution of public nuisances and crimes.” Clearly, without policing, we will find ourselves in a lawless country and who wants to go that way?

Yet, this is exactly what the Minneapolis City Council decided to do — disband the police. Especially after the riots following Floyd’s unwarranted death, this decision seems capricious, irresponsible and defies any common sense. If it is carried out, there will be no justice and no peace, but only bloodshed and anarchy. It will be Hell on Earth.

There are many problems with today’s police forces in America, but they only reflect the hate-filled society whose building blocks are falling apart. Undue violence is not the sole property of the police; America has the most violent and weaponized civil society in the world, far more than any backward regime you can imagine.

If things are to change, they must start from the root, from the people, the citizens and residents. Without blaming others, without self-righteousness and with a lot of sincerity and courage, people have to look inside at the values and feelings they have helped instate within society.

There is no question that we are all self-centered and see only our own interests. But today, our self-interest requires that we see to it that everyone gets their fair share. We cannot afford to neglect any part of society, since that part is certain to rebel and bring down the whole of society in flames along with itself. In other words, every person’s safety has become completely dependent on the safety of all the other people in society. Today, acting according to this premise is mandatory, since the consequences of not doing so are anarchy, destruction and death.

In a society whose members all feel dependent on each other, policing really can become redundant. If people care for others as much as they care for themselves, they won’t hurt anyone, and everyone will help one another. Therefore, today’s primary goal of every community, city, state and country must be for every person to learn about the laws of the interdependent society, gradually come to live by them and in this way develop love toward other people in the community.

This learning is not a course; it is ongoing learning that accompanies every person in society and adapts itself to the changing society. In today’s society, too few people know about the system of governance that makes so many crucial decisions about their lives. Educated people will behave in an educated manner. So the learning must consist of both theory and practice. The theoretical part will familiarize people with the institutions and regulations that allow a modern society to function, as well as a broader outlook on the interconnected nature of contemporary society. The practical part will consist of exercises that nurture the feeling of mutual connection among people. This is the part that will enable them to transform their lives from a life of suspicion and tension to a life of openness and joy.

To achieve this transformation, the practical part focuses on building solidarity with one’s community, city, state and country, a sense of mutual responsibility and the confidence that by working together toward these goals, it is possible to transform one’s life.

While the theoretical part can be taught to individuals, the practical part requires learning in groups. These can be either physical groups or online groups, but the group needs to work together and develop a group dynamic. In the process of overcoming ego clashes and other social tensions, people will learn the benefits of caring about the society and what to do when a conflict becomes too heated to mitigate. When there is good will all around, there will always be a solution.

Only if a community achieves a substantial level of mutual responsibility is it possible to reduce the level of policing. Instead of law enforcement, the mutual concern of the members of the community will abolish offenses within the community almost entirely and deal effectively with such cases when they arise. But until that happens — No police? No justice, no peace.
[266138]