“Has The COVID-19 Pandemic Caused Any Increase In Antisemitism, With Some People Blaming Jews/Israel/Mossad For Releasing The Virus?” (Quora)

Michael Laitman, On Quora: “Has the COVID-19 pandemic caused any increase in antisemitism, with some people blaming Jews/Israel/Mossad for releasing the virus?“

The websites Israellycool and Ynetnews documented multiple posts on social media showing blame of Jews for the coronavirus. Ynetnews published its findings just 18 days after the Israellycool post, and it showed a significantly larger amount of anti-Semitic posts added in that short timeframe.

Some views spread through the posts included the coronavirus engineered by Jews as a biological weapon for power motives, as a conspiratorial plot to reduce the world’s population, and that the Jews and Israel developed the coronavirus for wealth and power motives, which would be confirmed if Israel invented the vaccine to counter the virus. Also, the arrest of a 23-year-old man in New Jersey was reported after he stated, on websites favored by White Supremacists, his intent to target Jews he blamed for spreading coronavirus.

Throughout history, Jews have been viewed as the root of all evil, scapegoated for many different misfortunes that have befallen their surrounding societies and cultures, and this foreboding trend has continued into our very era. From blame for the murder of Jesus Christ, to intentionally causing the Black Death pandemic, to various economic crises, and many other phenomena, Jews have continually found themselves under accusation. 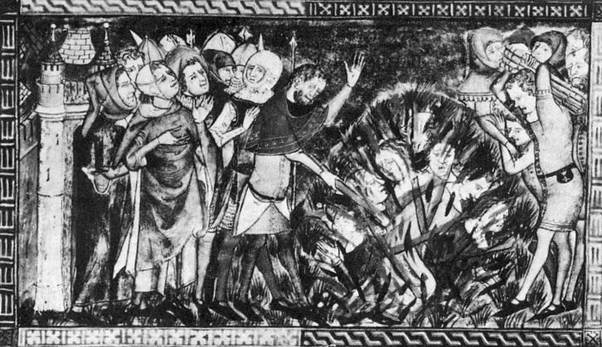 Image: Burning of Jews during the Black Death epidemic, 1349. Wikimedia.

In the last few years, as times have become tougher, anti-Semitic crimes and threats have also vastly increased around the world. A little before the coronavirus took the world by storm, a spike in anti-Semitic events in the United States started spawning questions as to whether a second Holocaust could take place in America.

As nature tightens humanity’s connection and more and more hatred surfaces between people, the time is ripe for learning how to realize our increasing connection positively: how to unite above the growing divisiveness, as is written in the words, “love will cover all crimes.”

Jews, whether knowingly or unknowingly, hold the method to unite above division and spread such unity to the world, i.e., to be “a light unto the nations.”

However, if we fail to progress to unity upon our own differences, we will then continue bringing a destructive negative tendency to the world, and more and more people will instinctively feel that we are the root of the world’s problems, as we now also see with the coronavirus.

The sooner we realize that our unity will have monumentally positive unifying rippling effects the world over, then the the sooner we can treat anti-Semitism at its root. By uniting, we fulfill our role in the world, establishing a new balance of forces between humanity and nature.

If we realize our role and initiate our own unity, we will then not only see anti-Semitism diminish, but on the contrary, we can then expect a new love and respect for a Jewish people who emit a positive unifying example to the world. There would be no reason for anyone to hate Jews since people would know how to unite, and united people do not hate each other, nor the ones who show the way to their unity.

Man In An Interconnected World, Part 3

“Why Does Coronavirus Not Affect Animals And Birds?” (Quora)
Podcast Powered by podPress (v8.8)