“Why A Holocaust Might Happen Again“ (Breaking Israel News)

The largest portal Breaking Israel News published my new article “Why a Holocaust Might Happen Again“: 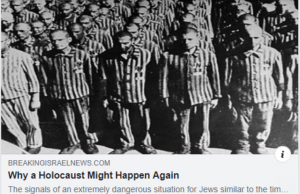 No, it is not Jewish hysteria. The signals of an extremely dangerous situation for Jews similar to the time preceding the Holocaust are out there, this time in America, where historically high numbers of violent anti-Semitic attacks are reported every day. Deliberate assaults upon Jews only for being Jews have become particularly recurrent in New York. Hate crime monitoring groups call the state an “epidemic.”

In fact, 2019 was the worst year on record for anti-Semitic incidents in New York City: around 214 complaints compared to 182 cases the previous year, according to police data. These make up roughly half of all hate crimes reported in the city.

The “Slow-Rolling Pogrom” in New York

In a recent letter sent to New York City Governor, Andrew Cuomo, four Jewish lawmakers urged him to declare state of emergency amid the spate of anti-Semitic offenses, expressing great concern that “it is no longer safe to be identifiably Orthodox in the State of New York. We cannot shop, walk down a street, send our children to school, or even worship in peace.”

They described the menace against the American Jewish community as a “slow-rolling pogrom,” and added, “anti-Semitic hate crimes have grown to frighteningly high numbers over the past several months…. identifiably Orthodox Jews in and around areas we represent have been targeted with a rash of violence unseen in modern history. Orthodox Jews are being regularly assaulted, menaced, stabbed and murdered in increasing numbers.”

I cannot view the current situation heedlessly. During the last decade I’ve warned through media articles and books about the threat of a potential new Shoah on American soil in light of the growing anti-Jewish sentiment from multiple fronts. Only a few years ago, when I met Jewish leaders to express my concern, they reacted with incredulity.

Now their perspective has changed. Former Democratic New York State Assemblyman Dov Hikind has questioned, “Why are Jews being assaulted in a way they were assaulted in pre-Nazi Germany?” and said, “if you were to ask Jews 20 years ago if a Holocaust could happen in America, you would get a uniform answer: ‘it’s impossible, not in America.’ Well, that’s not the case anymore.”

The increased recognition of American anti-Semitism is a positive first step toward addressing the problem and unearthing its solution. I expressed this in my new book The Jewish Choice: Unity or Anti-Semitism (p. 190) as follows:

“Clearly, the 20th century marked a new level in the cruelty of humankind, especially toward Jews. Having experienced the Holocaust, we cannot be certain that it will not happen again. If it happened once, it can happen twice, or thrice, and the globally mounting hatred toward Jews and toward the State of Israel proves that the fear of a second Holocaust is well-founded. This, once again, reminds us of the necessity to return to Abraham’s method of uniting above our differences, and of our duty to set an example to the world by so doing.”

“The world erroneously considers Nazism a particular offshoot of Germany. In truth, it is the offshoot of a democracy and socialism that were left without … manners and justice. Thus, all the nations are the same in this, and there is no hope at all that Nazism will perish with the victory of the Allies, for tomorrow the Anglo-Saxons will adopt Nazism, since they, too, live in a world of democrats and Nazis.” (The Writings of the Last Generation)

The Jewish Duty to Prevent a New Tragedy

Our Jewish nation was forged upon the ideology of mercy and brotherly love, when strangers agreed to unite and bond as equals. We became a nation when we pledged to be “as one man with one heart.” Since then, it has been our duty to maintain this connection and pass it on, namely to be a “light unto the nations,” not out of entitlement, but to serve others. Therefore, the duty of the Jewish people is to execute and set an example of love of others to the world.

Over time, we have abandoned the unique connection we once cultivated and became self-centered. But now that globalization has made us interdependent, humanity is seeking a way to live together peacefully but cannot find one. Until Jews relearn how to be as united as before, the world lacks access to the knowledge of how to do this and will continue to blame us for its woes. Their unfulfilled demand is unfailingly projected as anti-Semitism, as a mounting pressure, until we change our course of action toward cohesion rather than division.

So being a light unto nations is a practical assignment: make peace among ourselves and the world will also be at peace.

The world is always examining what we do, so whenever we display disharmony, it serves as a bad example that becomes reflected in the world. If we quarrel among each other, we project this disharmony onto other nations and they also begin to fight. But deep within they sense that their fight somehow originated with us, just as they express in the forms of mounting rancor toward us.

Our problem is that we unite only when a common enemy threatens us. If we would turn unity into a conscious process, we would require no dark outcome of a new Holocaust to direct us toward it. Thus, the pressing times we face will decisively demand us to make a fateful decision. Our Jewish choice is whether to remain divided and at odds and suffer the consequences, or to reverse our attitude toward one another, develop mutual responsibility and care, and spread it to the world. If we wisely choose the latter, a new reality of trust, friendship, and mutual support will unfold before us, in America and worldwide.

What Do I Need To Fix?
Podcast Powered by podPress (v8.8)