“How Parents Can Prevent Their Children Cutting Them Off” (KabNet)

KabNet published my new article: “How Parents Can Prevent Their Children Cutting Them Off” 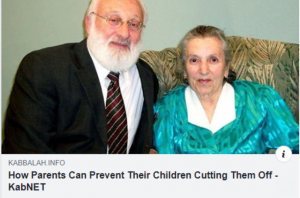 When my late mother lived alone in her older years in Canada, I did everything I could to find her the best place to live.

My son, who also lives in Canada, would send me pictures and videos of her, as he was well aware of my concern for her, and regularly updated how she was getting along and felt. This continued until the very day he sadly informed me of her passing.

Today, there is a phenomenon where adult children cut off their parents. Sometimes it is due to physical or emotional abuse they suffered in childhood, but it is also often related simply to money. The older children feel that their parents fail to provide them with the money they wanted or expected, and so the children scrap the parents from their lives, cutting them off from their grandchildren as well, sometimes to such extremes where they even tell their children that their grandparents are dead.

“It is our duty to our children to sustain a parallel relationship of being both their friends and their teachers.”

Over the years, I have closely observed how my wife raises our children. She made it clear to them that they could get everything they needed from us. Every cent we earned was for them, and this is also how it is today when they are grownups with families. Also, we have organized our savings and assets to be handed over to them when we leave the world. They are well aware of our investment in them, and how much we sacrifice for them, and they also discuss it openly among themselves.

At the same time, they have never been spoiled. It has always been made clear to them that they had to pay for everything they received in one way or another. For instance, we paid for their university studies monetarily, and they had to “pay” for those same studies with their full investment and focus.

It is very likely that this is an outcome of the culture we were raised in. Nevertheless, however, it is a healthy and correct approach. Both of my daughters completed their national service, and each served the full two years. My point is that my children have always received my full support, but also a deliberate hand, which demands accountability, responsibility and effort.

It is our duty to our children to sustain a parallel relationship of being both their friends and their teachers. With such an approach, we prevent an attitude forming toward us as being something to use and discard of, i.e., where they perceive their parents as a mere ATM machine and a kitchen.

This is why it is beneficial for parents to spend time with their children: to talk with them, listen to them, and do the things that they enjoy doing together, i.e., becoming friends to a certain extent. Also, the children need to have a certain extent of fear in losing their parents’ positive attitude toward them if the children display contempt and laziness.

Such a relationship prevents any desire for children to cut their parents out of their lives. Why would anyone want to abandon anything that provides a sensation of confidence, security, safety, empowerment and warmth in their lives, especially in today’s turbulent times?

Our parents can be the closest people in our lives. Even today, I see my wife behaving similarly with our grandchildren. They get along very well, openly and honestly discussing everything together.

Education is conducted not by words, but by sensation. When children are impressed by a genuine person-to-person relationship, it is recorded in their hearts, and they naturally emulate it in their relationships with others.

The examples we receive at home as we grow up later affect our every relationship in life. The general principle is as follows:

Attaining The Creator In The Center Of The Group
Podcast Powered by podPress (v8.8)