The strength of connection within the ten is measured by disturbances that we can unite above. Egoism is revealed, separating us and giving rise to hatred for each other, but we begin to unite above it. Mutual rejection remains, thus we are working with both of these states.

#Hanukkah is the middle of the path: “stopped here” (hanu-po). There is still a significant and unique war ahead, but for now, having achieved bestowing desires, we are getting a respite. First, the war for the desires of bestowal, faith above reason, and then we begin to work with the desires of reception for the sake of bestowal.

We have to learn to live in both states simultaneously—between hatred and love that support each other. Hatred is the heat, the fire that incites love, and keeps fueling it more and more. There is no plus without a minus. We need to understand how to combine these opposites.

If you are able to build a relationship where, on the one side, you’re ready to “kill each other,” but above it you come to love of friends—this is called a ten, if you can’t—there is no ten as of yet. A simple condition, just two sides: love will cover all crimes.

We must rejoice at the rise of a conflict—be insightful about what the Creator is sending us. It is wonderful that He awakens enmity. All hatred comes from the breakage, a ditch crawling with snakes, but it gets revealed gradually so that we can build a layer of unity above it.

“One needs to pull away from the feeder, because it is not right for a person to eat from the same trough as a donkey.”
It means that I perceive reality not just pragmatically, primitively, like an animal, but see the melody of the Creator in it.
#wisdom #Kabbalah

We abandon all our quarrels and disagreements and begin to unite above them in the opposite way. Whatever I hated—I now love, what I used to repel—I pull closer, whomever I didn’t want to see—I can’t take my eyes off. I overcome this by building one state above another.

By turning the angel of death into a holy angel we are building the image of the Creator. All the evil that the Creator has imbedded us with we transform into His image.
#wisdom #kabbalah #Hannukah

One can’t continue the old way after Hanukkah, a new power is needed because a different light is coming. Before Hanukkah we grow in bestowing desires, in smallness, Galgalta-Einaim. We do not fight our ego but rise above it.
#Hanukkah #wisdom #Kabbalah

One should not think that a simple departure from egoism is the end of correction. The truth is that it is only a preparation for correction, which has not even begun.
#HanukkahSameach #hannukah2019

We must rejoice in the bad as we do in the good because good alone can’t build a powerful Kli. Let’s grow up and align ourselves correctly.
#Kabbalah #Wisdom #quotes

Two sides:
1. Egoism—against unity
2. Unity above ego.
Both have to exist in us. From the bottom we get the strength of desire (Aviut), from above we get the power of intention (Zakut), using both to build a vessel (Kli) for the revelation of the Creator.
#Kabbalah #unity

I must feel the Creator playing me like a violin: be sensitive, be on the lookout, and invite the Creator in. The #world is the Creator’s message to the creature in various forms: through sounds, images, colors—this is the language of the Creator. If a person understands it, he connects with creation and the Creator.

With great joy, I’m sharing with you the release of my newest book, “The Jewish Choice: Unity or #Antisemitism.” It voices all that my teachers taught me about the value of unity for the Jewish people, and it does so like no other book does. https://amzn.to/39aPm2j
#book #Jews 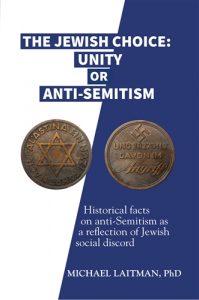 Why We Need This World