Toward A Single Origin

Question: Earlier people believed in a multitude of deities, now we’ve come to monotheism and it is all the same, even with the understanding of the existence of an upper force, everyone still prays to their own power. It seems like there are two forces: good and evil?

Answer: The problem is that we don’t attribute them to a single force, stemming from the same source, a singular root.

It would be much easier for us if only we understood that it originates from the one source. Then we’d be able to discern: How can I change myself to be connected to the root, and not to the positive or the negative force? I will never find peace between them.

I cannot belong to the right or the left line, to a certain party, or to some movement, to nothing at all! We see that communism failed, as did capitalism, fascism, and feudalism, not to mention democracy. The right and the left lines exist solely for the purpose of forcing a person to come to the middle line and find the Creator in it. Both of these lines of government come from Him, and only so a person will link them  and thus build the Creator within oneself.

From these two lines, good and bad, understanding and misunderstanding, awareness and confusion, etc., I have to build the image of the Creator that exists outside of me. 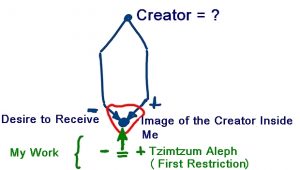 I don’t know the Creator, but I can construct His image so He is in me in complete adhesion. So it becomes my image, my final state.
[239478]
From the Kabbalah Lesson in Russian, 10/14/18

Related Material:
How To See The Creator Through This World
The Middle Line Is The Straight Road To The Creator
The World Where “There Is None Else Besides Him”

Bestow Contentment To The Creator
Podcast Powered by podPress (v8.8)